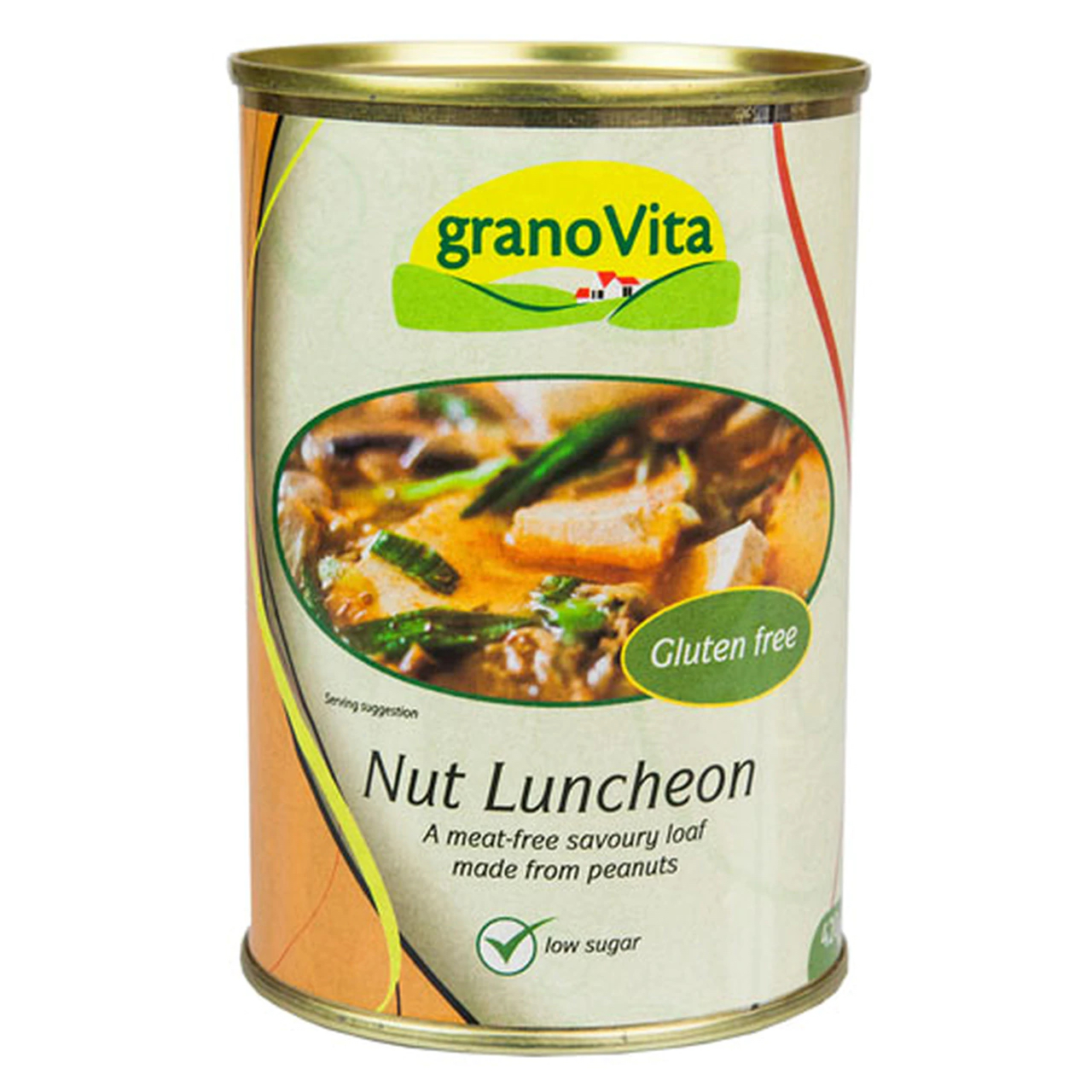 I haven’t eaten meat since the late 90s. Vegetarianism was on the rise at the time in the UK, but the selection of meat-free products was very poor compared with the current day, and many of them had to be bought in the health food shop. You either had to learn to cook actual food with vegetables and seasonings, or eat a very boring diet if you relied on the limited and bland selection of meat substitutes available. I don’t think Veganuary would be half so popular if the prospect was a month of Sosmix. This post is mainly for the enjoyment of those who did eat Beanfeast and TVP chunks.

All these modern health food supermarkets have the wrong idea, much too full of luxury and tempting new foods to try. What you need from a health food shop is the feeling that it’s bracingly good for you, bulk buying TVP chunks is possible, and that flavour is optional. (They used it all up on the nice smell inside). They have the right idea in Germany, where the word for health food shops is Reformhaus.

I originally laid out this post with some packaging images I found on Google, but they were such bad pictures of ugly packaging I took them all off. If you live outside the UK and don’t know what they look like, just be thankful you didn’t have a cupboard full of Sosmix. (Although ironically the current explosion of tempting vegan products in the UK is a bit of a curse to me, because so many of them use large amounts of coconut oil, which makes me ill). You can torture yourself with the packaging designs over at Old School Vegan Classics over on Instagram

A lot of these products are still available- I considered buying some to taste test them for this post, but then I realised I didn’t need to do that to myself.

A sachet of powder much like stuffing mix, prepared in a similar way- add water, mix, leave to stand for a while, then shape into sausages or patties and bake or fry. This stuff was ubiquitous. Also often available as a home-made version sold in plastic bags at healthfood shops. What’s in that pie? Sosmix. What’s that burger? Sosmix in a round form. Often teamed with indigestible wholemeal pastry to make incredibly heavy and dry homemade sausage rolls. You will eat it, and you will like it. (It’s all we’ve got). There’s a sosmix fan page out there.

A different sachet! Available in bolognese, shepherd’s pie or chilli variations, it was soya mince in various different seasonings. You added cold water, brought it to the boil, and simmered, trying to avoid burning at the bottom as it was a nightmare to clean off the pan. The bolognese version, although perfectly edible, would make Italians cry.

Could be stuffed with sosmix, beanfeast or rice (or like actual, vegetables). Your choice!

Canned peanut-based stodge. The whole thing comes out of the can in a lump with one dull thud, and must be sliced up before frying. Makes you thankful you were not a vegan in 1930.

Why yes, you can put this as a seasoning on anything. It looks like goldfish food, tastes of pure umami, and is full of vitamin B12. It’s still a very useful seasoning in meat-free cooking, but old habits die hard, and I still buy giant tubs of the stuff and add it to things it has no business being in.

The only way you’re getting your hands on any seitan, mate. Sold in both the health food shop and Chinese supermarkets. I’ve never noticed much difference between the “abalone”, “duck” and “chicken” versions, except for the impression of feather follicles on the poultry versions. Also available: tinned braised tofu.

Quorn came out in the late 90s, and was a revelation. It actually resembled meat? And wasn’t dry and cardboardy? What is this sorcery? (Initial problems with them using battery eggs as a binder I guess). For the first few years they just had mince, fake chicken fillets and very small burgers available, but the range soon grew and became the default fake meat in people’s minds. It was nice to now be presented with something edible when visiting people who weren’t used to vegetarian cooking.

A different powder you mix with water. This time with a cardboard baking form included. My dad accidentally gave me really bad food poisoning Christmas 2002 with one of these because he didn’t read the instructions properly. I wasn’t even aware you could get food poisoning from nut roast.

Still the go-to vegetarian breakfast sausage, albeit with many different rivals these days. What do you mean you don’t have to mould it yourself out of a stuffing-type substance?

You like quiche right? That’s what you’re getting given to eat. Sorry, what is a vegan?

Peas, carrots and sometimes sweetcorn, mixed up with some kind of mystery mush, shaped into fish finger shapes, and breaded. Taste of absolutely nothing. If you got a veggie burger from a takeaway or even many restaurants in the 90s, it was exactly the same thing, but round. I have a box of the finger versions in my freezer. I don’t remember buying them, and don’t like them. They’re obviously haunting me.

The upgrade is the bean burger- cheap versions are exactly the same as the veggie fingers but have kidney beans in.

The other default cheap freezer option was a nut cutlet made of chopped up nuts glued together with some kind of mush. Cook them for a minute too long, and they turn into a sad hockey puck.

Another not-so satisfying mincemeat from health food shops, this time made of of sunflower seeds.

Aka Tartex vegan paté. A very decent vegan pate that I still buy. In some countries it comes in a tin, in others like the UK in a large toothpaste type tube. I didn’t think anything of this until my American friend Alex visited and found the Tube Food hilarious and fascinating, and now I send her photos of any tube foods I see.

Ooh, you’re going somewhere fancy. What is the vegetarian option? A swiss roll made out of cottage cheese and eggs.

The only vegan cheese substitutes they have in the health food shop. Both are just different varieties of play dough, despite the Sheese packaging’s cheesy 90s Celtic Font attempt at portraying itself as some fine artisan product from the Hebrides. The Cheezly just smells (and tastes) like an industrial by-product.

Another health food shop favourite. Nobody ever follows the suggestion on the back to have it as a refreshing drink rather than a cooking ingredient.

Big bags of round chunks or fine mince from the health food shop that must be soaked in hot water and then be marinated before they taste of anything.

A potato starch, tapioca and gum arabic powder intended for baking vegan cakes. If you would like a cake that doesn’t rise much and has a weird aftertaste.

Gummi sweets have come a long way, and now there are lots of brands available in mainstream supermarkets that taste good and are hoof-free. It wasn’t always this way. You used to have to go to a health food shop and pay a small fortune for gelatine-free gummi bears, and there would always be something really wrong with them. Either tough as old leather or way too soft and dissolvable. Often some kind of unpleasant aftertaste and/or a sort of dusty texture. There was one brand that came in a cardboard box rather than a plastic bag that tasted particularly bad. At least the shops always had a good selection of Panda liquorice.

The main dairy-free yoghurt on the market. For some reason the chocolate and caramel ones had a completely different texture to the fruit ones, despite being marketed as different flavours of the same thing.

Dairy free margarines. Vitalite is only for spreading and makes terrible cakes. Tomor is actually a Kosher formula meant for avoiding mixing meat and dairy in the same dish, but is good for baking too.

Usually from the freezer section, and usually supermarket own brand, a bland burger type thing crafted out of potato and cheese (maybe with an exciting addition of some spring onion), seemingly intended to be served as a main with more stodge.

The only non-dairy ice cream out there. Sorry, we only stock vanilla. There might be some sad versions of a Cornetto or Maxibon in the freezer too, which taste of cardboard and disappointment.

Why they’re exactly the same as meat sausages, just fashioned out of potato and cheese. Let’s serve them up to you with potatoes.

You thought this was chocolate? And that you were going to enjoy it? Think again.