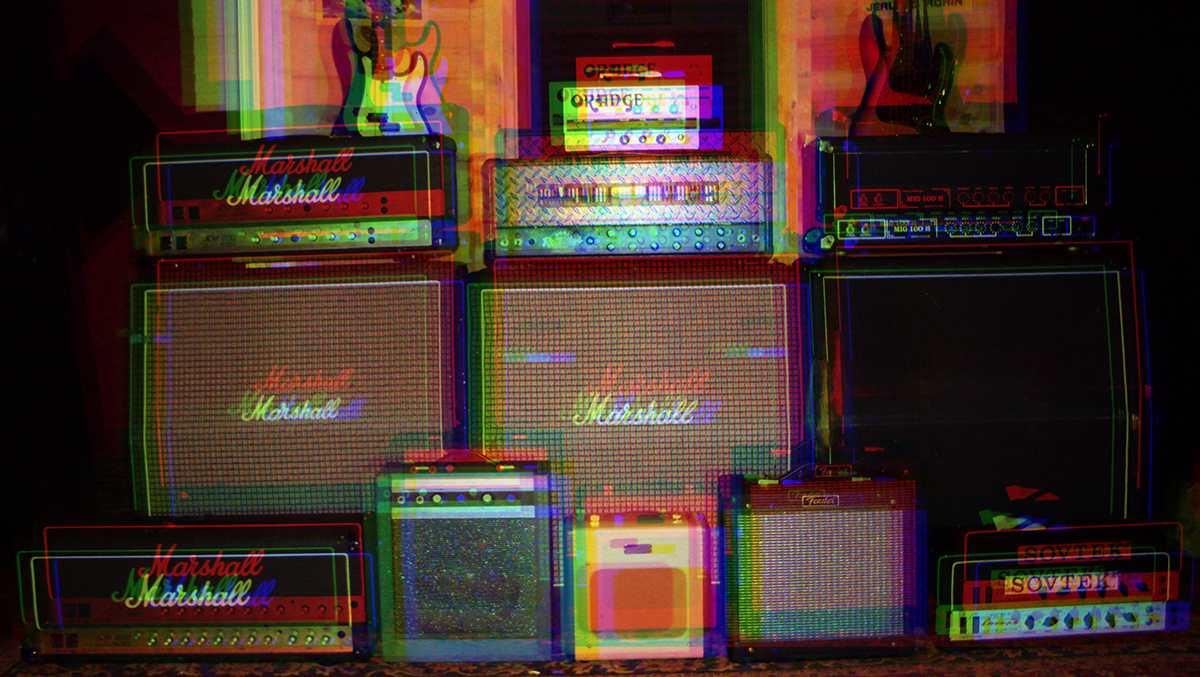 When I was putting on gigs I used to produce zines with the listings and a beginner’s guide to various aspects of making your own music. One of the other articles about pedals can be read here.

If you are playing an electric guitar or bass, you will need an amp. Here’s a guide to how they work, and how to find the one that will suit you.

You need a specific amp designed for the guitar or bass. Guitars will often sound bad and muddy through a bass amp, and playing a bass through a guitar amp can damage it, because it’s not designed for such low frequencies. Even if it doesn’t get damaged, it won’t have that full, rich sound you’re looking for.

The pickups on the guitar are magnets wrapped in wire. This creates a magnetic field. When you pluck the strings, it changes and disrupts the patterns of the magnetism, which turns into an electrical signal, transmitted via the cable. Of course you can’t hear this, so you need something to turn it into a sound, which is where the amp comes in.

The preamp circuit in the amp turns the very weak signal from the guitar into something usable for audio, and then the power amp circuit turns it into a LOUD sound that can be played on the speaker.

Different types of preamp circuits in the amp give the sound very different kinds of character, and the well-known brands of amps all have their signature sound. Using the wrong amp for the sound you’re trying to achieve can be really counter-productive.

There are two kinds of technology used in guitar amps- valve and solid state.

Vacuum tubes or valves are the older kind. The current is passed through several large glass vacuum tubes to amplify it. Although the technology has been superseded, many people think the sound is warmer and richer, and still prefer to use valve amps. They also have a very distinctive warm distortion sound when the volume is cranked up high.

A valve amp needs more careful looking after- the tubes need time to warm up before playing, can get very hot in use, and can’t be moved while they’re still hot. You also need to be more careful moving the amp to not damage the glass inside. It’s also a good idea to have a spare set of replacement valves for when something goes wrong.

Solid state or transistor amps use modern electronics and are more convenient. There’s no glass to break or overheat. A lot of people don’t find the sound as satisfying as a valve amp though. Many solid state amps now come with effects and amp modelling built in. This means there’s a digital filter that tries to make the amp sound like different classic amps. Whether this is successful or sounds good depends on the specific model of amp and your personal tastes.

Useful information: Everyone hates the Line 6 Spider Amp. They’re everywhere though, and lots of music shops throw one in almost free with a guitar. It’s a solid state amp with an unpleasant basic clean tone and the CHEESIEST digital effects

There are also two basic physical forms of amp- combo and head+cab.

Combo amps have the amp circuitry and speaker in one unit.  You can get small ones for practice at home, and large ones for performance. On stage a combo amp will often be miked up- a microphone will be placed in front of it so the sound plays via the PA as well as through the amp speaker. This is the best place to start for a beginner and for playing at home.

Heads and cabs are two separate units. The amp head handles the amplification, and it’s then connected up to separate speaker cabinets. This is more flexible, because you can choose different speakers with different sound characteristics and use BIG speakers. (One speaker is known as a half stack, and a pair one above the other is a full stack). Most people also choose this because it’s REALLY LOUD. Smaller venues will often not mic up large speaker cabs- they’re already loud enough.

With cabs, make sure to use the special speaker cables to connect them up, rather than guitar cables. They look very similar, but are different specs, and you could find everything suddenly not working (or worst case, melting) because you used the wrong cables, and they finally gave out.

Of course this is a more expensive option, and you will also need a practice amp to use at home to make sure your neighbours don’t hate you. You really don’t need a full stack if you’re not playing live. There is also the issue of who will carry it up the stairs and how you transport it.

(And when you see footage of stadium bands with a million cabs behind them, often a lot of them are fake boxes designed to look like a speaker to make the stage look cool- usually only the top row is actually connected).

There are also rack-mounted sets, but we won’t go into them, because that’s more of a stadium setup.

Some people who are really devoted to amps use multiple amp heads simultaneously via a splitter pedal. You can create a really good sound and tone this way, but of course it’s very expensive and you’ve got to know what you’re doing to connect it all up correctly. You can’t just get a splitter cable- you need the electronics of the pedal. Our friend Tanya who plays in Bismuth and Dark Mother has up to five amp heads in play.

Often people are kind enough to lend equipment. Don’t assume- ask politely in advance. This usually applies to cabs and combo amps. Most people are more precious about their heads. Make sure all cabs are connected right (see ohms) and don’t crank it up without permission.

The speakers on combo amps and cabs come in different sizes. Bigger speaker cabinets usually have multiple smaller speakers under the cloth rather than one giant speaker. The spec of the speaker cab unit will often be expressed in how many there are of each type of individual speaker- ie 4×12”

The power of the amp is usually measured in watts, the higher the number the more powerful. Sounds simple? It gets a little confusing, as solid state and valve amps are rated differently, and combos and heads come out differently. As do bass and guitar. So I will split them up by category:

Using a head and cabs also makes a difference. Using a low watt valve head with some big speakers can be very very loud. The bigger the speaker, the louder everything is too.

This is also where the difference between valve and solid state amps come into play.

Basically valve amps sound good at near maximum volume, and solid state amps generally don’t. Using a smaller valve amp and cranking it up high will have a smooth distortion sound, whereas a small transistor amp up high is harsh.

This is another reason why the wattage categories are different for the two types of amp. A 20W valve amp can sound really good on stage turned up high, but with a solid state amp you are better off having a larger amp at medium volume.

Electrical resistance (or impedance) is measured in ohms- Ω. You don’t have to worry about this if you’re using a combo amp. However it’s important when plugging cabs in. Too much or too little resistance in the circuit can ruin equipment- especially when using a valve head.

Each speaker has an Ω rating. Your head output has to match (there’s a switch to adjust it). If you use one 4Ω speaker, switch the amp to 4Ω. Simple.

If you’re using multiple speakers, then you need to be more careful:

Connected separately (“parallel”): This is the opposite- two 4Ω = 2Ω output- you DIVIDE by number of cabs

If someone is generous enough to lend their cabs, get them to help you set them up right. It’s really not much fun blowing up someone else’s gear.