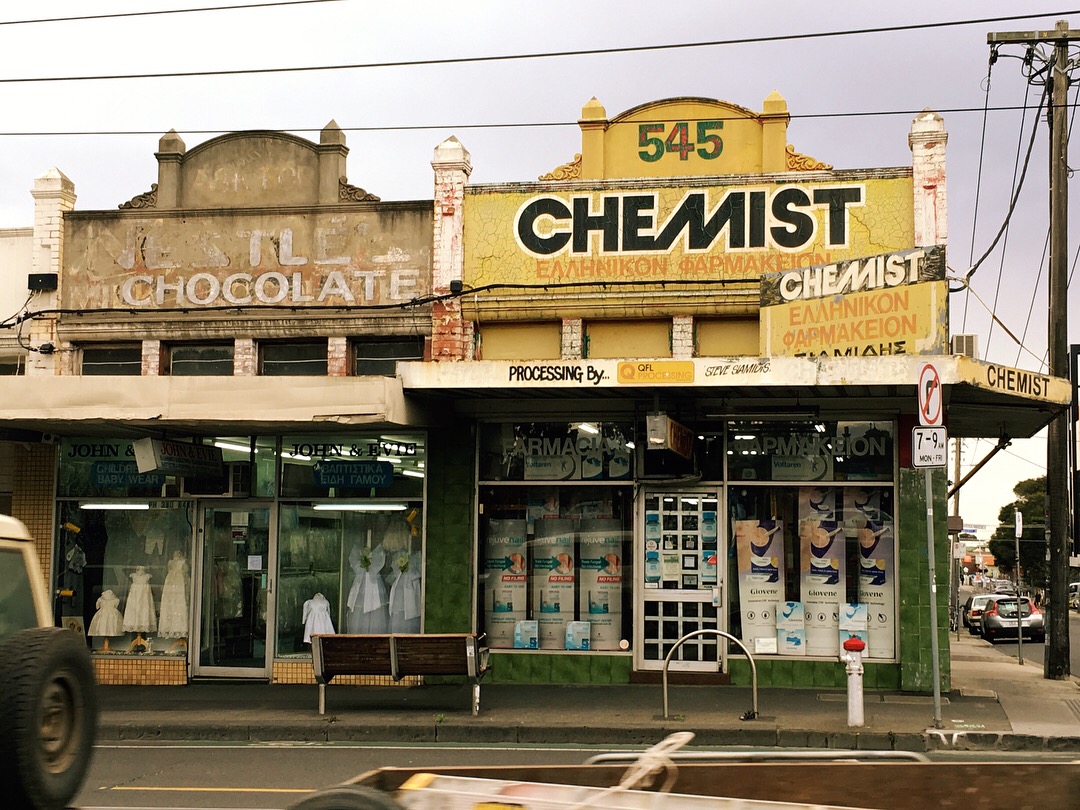 Here’s some photos from around Melbourne in Sept 2018 (yes, it has taken me that long to sort them out), they’re mostly phone photos taken as I wandered around. Melbourne is a mix of Victorian terraces very similar to those in the UK (with the addition of sunporches), gleaming new blocks, and wild west saloon type streets like this. Pretty much every building has a canopy at the front- the sun is hot in the summer, and Melbourne has a lot of rain in the winter. The main streets are all wide, with a tramline down the middle, and then there’s a network of narrow laneways between the backstreets, often with interesting cafes and shops tucked down them, meaning it’s a very walkable city (unlike some of the central parts of Sydney). I’ve written a zine about the trip which you can order here.

Note the pick-up or ute (short for utility) as they’re called in Australia. They’re everywhere.

There’s also quite a few of these covered arcades dotted around the city centre.

The main downside of the wide main streets is that it takes forever to cross the road, and jaywalking is illegal in Australia (although apparently they enforce it much more strongly in Sydney than Melbourne). It’s always something I have to bear in mind in other countries, because you can cross the road wherever/whenever you want in the UK as long as you don’t cause an accident.

Melbourne is also known for coffee- you can’t turn around without seeing another cafe. Starbucks didn’t make any headway here

Pretty much the first thing I did after arriving late the previous night. Even with taking melantonin bought en route in Singapore, I get pretty bad jetlag. I don’t think I’m cut out to be one of those people who’s constantly taking long flights, which is better for the environment. When I’m in a place I can tough it out because I want to see things, but when I get back home I’m useless for about 2 days. I guess that will teach me to go to places like Japan or Australia that involve such long journeys.

Woolworths is still going in Australia as a supermarket. It was very weird to be recommended the “Woolworths sushi counter” (it is pretty good and cheap).

I got an Australian sim card there to use in my phone because my operator’s Australasia roaming bundle was a total joke, and it came with this tool for opening the slot. I was very tempted by the Woolworths Mobile one for my own personal amusement, but this company had a special offer that was too good to ignore.