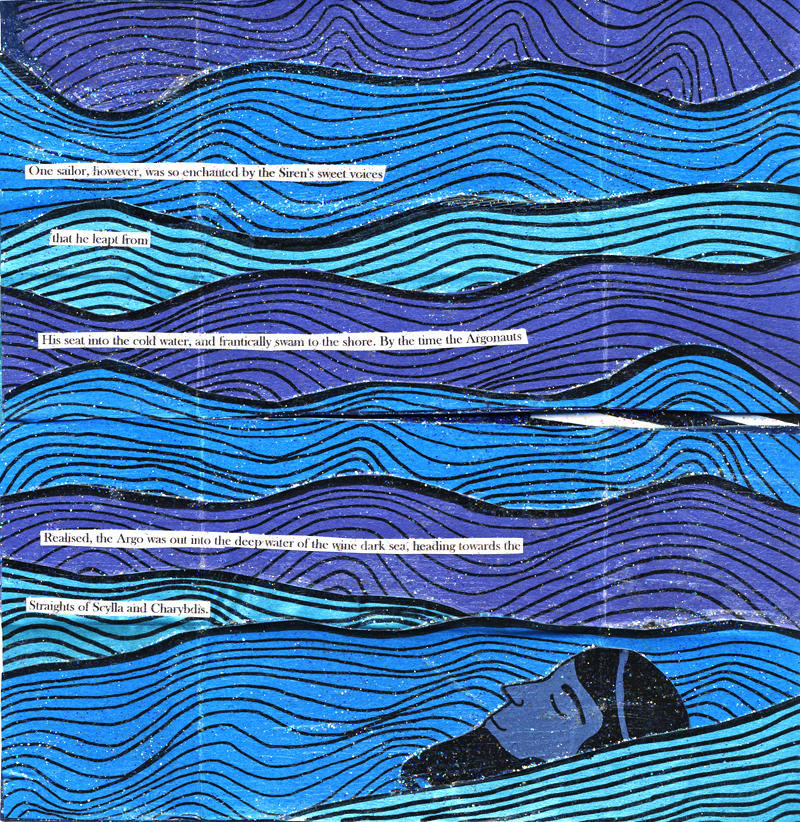 This was something I made as development work on my MA, and never finished. It’s an endless card. Basically you cut four rectangles of card, and fold and glue them in such a way that you create a card that opens to reveal another opening, which then opens to another, and so on. You get four different pictures that open up. There’s a tutorial to make one here. I went to a workshop where they showed you how to make them, and the woman running it had made a very nice card of the story of Dorian Grey.

I decided to make my own as part of the storyboarding process for my project, in this case the story of the sirens. Once I’d glued the outside on though, I realise that the cardboard I’d chosen for the base was far too thick, so I didn’t do the interior in the end. Even with two sides covered, the back stopped meeting, as you can see in the second picture. What you can see is the first and last picture of the story.

The inside had the sirens flying down, and then you opened it to Orpheus playing his harp. The artwork would never have stayed flat though. I made it with various kinds of metallic paper, and posca markers. The text is a print out of the script I was using. I’ll make another some time, with much thinner card. It’s a difficult thing to scan, because the paper is metallic, and it’s coated with a layer of glittery glaze. It wasn’t originally meant to be glittery, it’s just that when I tested a small sample, the plain glaze made the ink run, yet the glittery version didn’t, and I don’t know why. I needed to put something over the paper to make sure that the edges stayed down when you opened it, so I went with the glitter.