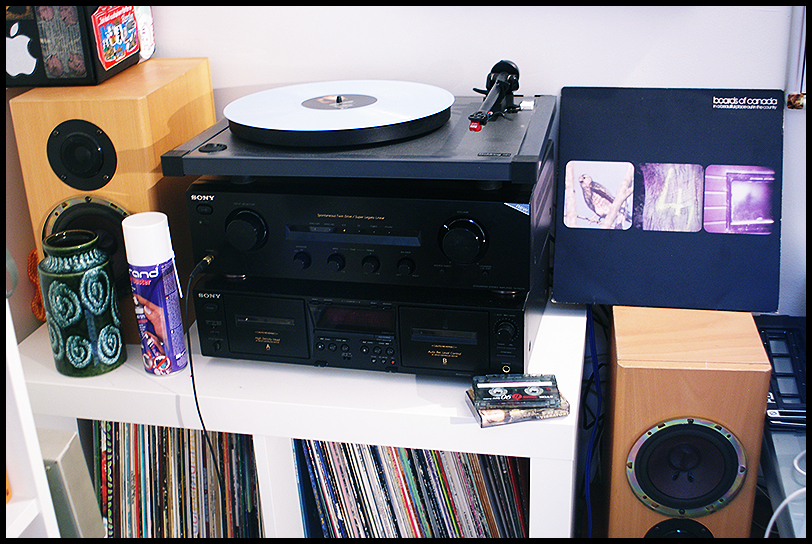 Listening to my grandad’s stereo (but not his record collection)

I recently received my grandad’s stereo. He’s 89 and has moved into an old people’s home, and said he didn’t need it any more. He was an electrical engineer for Philips, so his choice of appliances can usually be relied on. I was expecting something from the 70s, but then it turned out he’d actually bought this one 3-4 years ago. I don’t know why he felt the need to buy a whole new stereo to listen to his 10 Shirley Bassey records. He once gave me a tape with Italian lessons on one side, and Shirley Bassey songs on the other. I guess he felt it was about time I took up both of those things.

There were some 70s speakers with tweed fronts though (under the desk, can’t be bothered to crawl under there to take a picture). I already had the wooden ones pictured, which have always been missing the grille thing, so now I’m enjoying quadrophonic sound. Also, I can make tapes for people off vinyl and the computer now. Let me know if you want one.
When I first set it up, it sounded terrible. I thought it was a speaker wire issue, so I spent ages faffing unscrewing/screwing the wires into the terminals, swapping them, re-stripping the ends of the wire etc. I eventually consulted the manual, and it talked about adjusting the position of the weight at the end of the record player arm. I went, “huh? what weight?” and realised it was in a plastic bag with the remote for some reason. Once it was on in the correct spot, everything sounded great.

I didn’t get to go to any Record Store Day stuff this year, because I was at work. I’m always at work at the moment it seems. From the end of May it won’t be so bad. I still really miss Magic Discs in Gillingham. There’s nothing like having a second-hand record shop where you go in, and the owners have been surprise reserving stuff for you because they know what you like. I’ll write about the place some day, probably for a split zine about Medway me & Tukru were planning on making some time.

There is something a bit bunker or ship’s cabin like about my room here. Since I moved last week I’ve been listening to the Boards of Canada non-stop. I think the shape of the room and the hexagons on the bed-spread have been subtly influencing me. Probably also influenced by reading about how they’d been slipping singles into Rough Trade unnoticed. I was imagining a fake magazine for bunker enthusiasts the other day. I’ll draw the covers soon in my wobbly way and colour them in badly with markers. It had reviews of concrete and tinned food, and a free dvd of Threads for all readers.

Before that I had this 70s Sony amp that I got in the recycling centre at Brighton for £10. The record player is a bit crap, but it sounded pretty ok through the amp. The tape connector at the back was dodgy though, so I couldn’t tape things without a lot of static. Last summer it finally gave up the ghost. I found a repair guy who specialised in these things, but the repair cost was around £250, which didn’t seem worth it. Since then the record player was connected to some computer speakers, which was really, really unsatisfactory. Having good sound quality again is really, really nice.

The hexagons. They are everywhere.