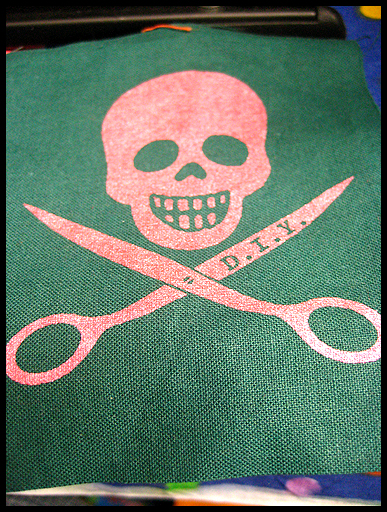 Sunday was the London Zine Symposium, and I had a stall with the other Brighton Zinefest people. We went up together on the train, and that seemed to counteract the jinx that plagues me any time I try to go to a zine event in London which cancels/seriously delays any known form of transport. I did forget to bring the “up for trades” badges though, and we had to make do with German ones (not that useful in an English-speaking event!). There were two rooms this year, about 2 million people I knew and it got very hot. I did a workshop with Alex about Etsy, we basically made it up as we went along.

Here’s our stall with assorted bits, and vegan cakes.

Toby got this amazing bag with “I’m the goddamn kraken” painted on it, from the people with the stall next to us (they were very young, and it was their first event, their zine was called Everything You Touch Turns to Gold)

I got this amazing patch from the Irish people from Loserdom zine on the other side of us, it’s now firmly ensconced on the arm of my jacket to show I’m in the DIY corps.

More of the room.

Tukru (jn her knitted bow), Eleanor and Flick. Scott, Chris T, and Dan O were also there, but for some reason I didn’t get a shot of them. I saw my friends Fraser, Sanjay and Chloe as well as all the zine stallholders I knew.

Alex on the train.

Everyone went for a drink afterwards, and the pub was so packed that we had to resort to sitting in the street, on the pavement (don’t worry, it was an empty street). The americans amongst us were amazed that this was both legal and acceptable.

I caught the bus back to Victoria with Tukru and Alex, and they compared catchphrases- Alex “it’s true!” Canadianly, and Tukru-“Good times!”, and then we went our separate ways, T to Chatham, me & A to Brighton, where I walked Alex to Ellie’s house where she was staying (my flat is too cluttered and tiny for guests really), then sleep.