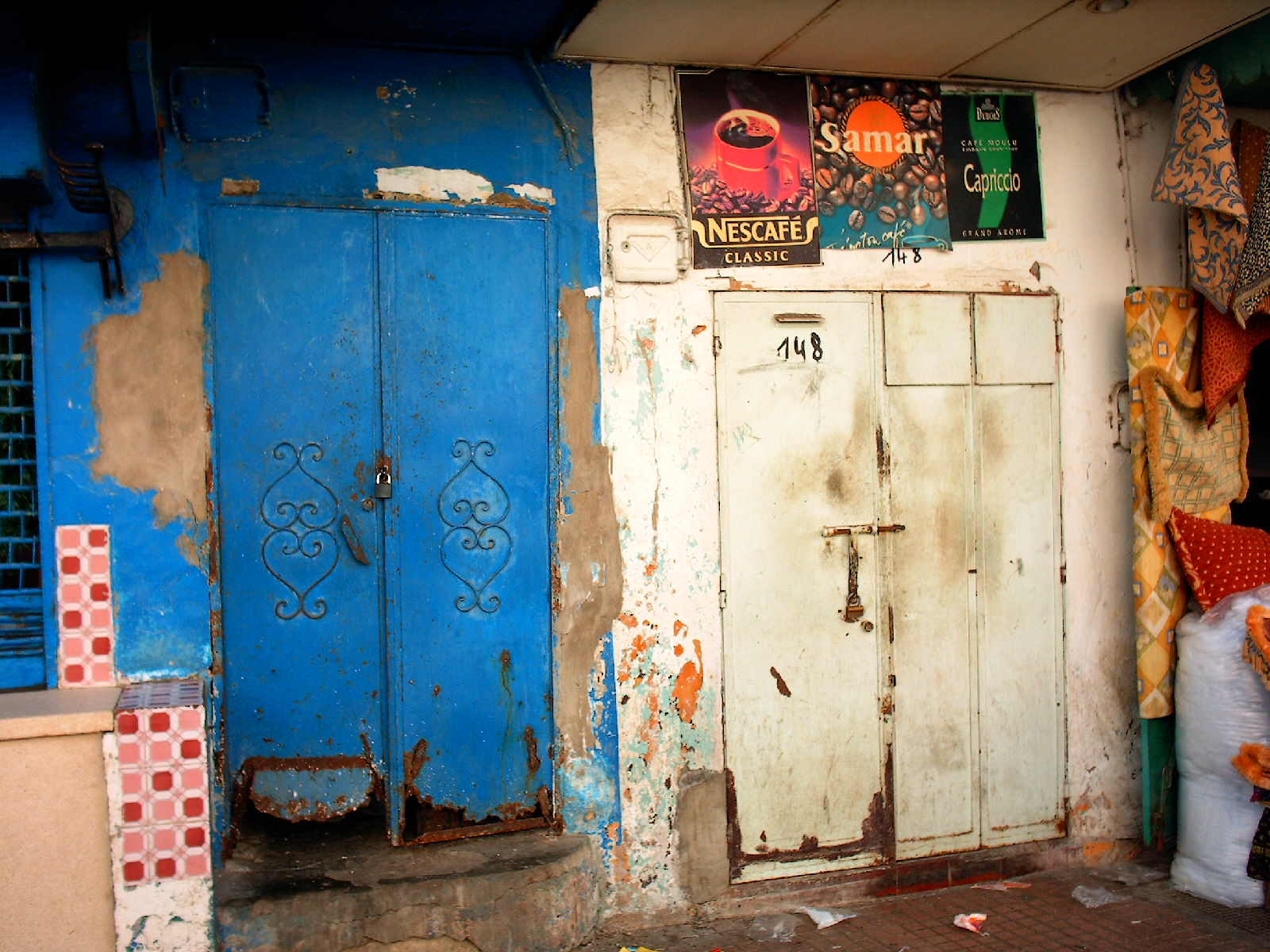 Here’s some photos from a trip to Morocco I’ve dug out of the archives from when I first got a digital camera in 2004 (you can see the whole album here). I was in between my first and second years of university, and bought a cheap digital camera from Aldi, it was surprisingly decent though, and it’s hard to take bad photos in Morocco because the light is so clear and the colours are so vibrant. Most of these pictures are from Rabat or Essaouira.

I spent a large chunk of the summer in Morocco with my mum that year, something we’d done before. That sounds very luxurious, but it wasn’t very expensive. In those days direct flights to Morocco were pricey, so the cheap option was to get a £20 flight to Spain and then get the ferry from somewhere like Algeciras or Gibraltar across to Tangier. I think this time we flew to Jerez, and took the ferry from Cadiz, but I can’t remember whether it was the time we came back via Gibraltar or not (Gibraltar is a very strange place- it’s like if Marks and Spencers were a town just off the coast of Spain).

I also can’t remember if it was the occasion when some huge cockroaches hitched a ride to Tangier in my mum’s bag, and we had to stand on a hostel bed fishing clothes out of her bag with wire coat hangers and shaking them, to make sure all the cockroaches were gone.

Once you were in Morocco, it was very cheap. We stayed in clean, pleasant hostels that cost around £2 a night, and rented a traditional riad house in Essaouira at the end of the tourist season for two weeks for not too much money. Even now when I check the prices of places that include breakfast, they’re offering private rooms for £11 a night. Travel within Morocco is pretty easy and cheap too (I just looked up how much a standard train ticket between Marrakech and Essaouira (3hrs) costs now, and it’s 70 dirhams, about £4.70, and a first class between Tangier and Marrakech (10 hrs) costs about £20), there are air conditioned inter-city buses linking up most places, and the bigger cities have train links. The trains are a little old fashioned, with wooden compartments and toilets that are holes that drop straight down onto the tracks (something that works better in a hot, dry country like Morocco…), but they’re clean and safe, as are the buses. Taxis are also cheap, and there are also mini vans called grands taxis that follow set routes and fit 6 passengers.

(A common arrangement in cafés in Morocco- someone brings a big tray of cakes and pastries over to your table, and you transfer the ones you want to your plate, and then they come back and collect the tray)

Eating out is also cheap for tourists (obviously not so much if you’re earning local wages), a full meal costing a couple of pounds at the time. The food is delicious, and as a vegetarian I never had any trouble finding anything good to eat. I might have accidentally eaten meat stock, but I never had any surprise meat, which is all I ask when travelling. I never had any trouble with my stomach either, and I hardly have an iron stomach. We bought some Intétrix on arrival (you can’t buy it in the UK) and took it religiously. After a few days I ate food from street stalls (lots of delicious things like msemen) and cleaned my teeth with tap water and was fine (I still stuck to bottled drinking water though, as do a lot of locals).

Morocco is not the place to go if you want a boozy holiday though. It’s not a strictly religious country, and bars exist, but most people don’t drink alcohol, so the bars tend to be seedy and the haunt of sleazy old men. (Mixing Intétrix and alcohol isn’t a good idea for your liver anyway.) Most people go to cafés instead for social meetings and have soft drinks or mint tea. The ice cream and cakes are also excellent.

Language-wise, people speak Moroccan Arabic (aka Darija), French and Amazigh, with a large proportion of people being fluent French speakers, and French often being the language of officialdom as a hangover from the colonial days. Almost everything is labelled in Arabic and French. I don’t know how useful it is for a tourist to try to cram lots of Arabic before visiting (although being able to read is obviously really useful). The problem is that the Arabic of Morocco is a very distinctive dialect that native Arabic speakers from other countries often have trouble with (and also as a Saudi student I taught complained “as soon as you get used to their strong accent and different grammar, you realise half the words are French and you still can’t understand them”). Textbooks will teach you to speak formal Modern Standard Arabic like a newsreader, or to sound Egyptian (Egypt makes a lot of films and tv shows, so people are familiar with their dialect). So the people in Morocco will understand what you say with no problem, but then you won’t understand what they reply. I never had any communication problems speaking French with people.

Street harassment can be an issue in Morocco, especially from men insisting on trying to give you unsolicited guided tours of places, but I found once you’d been in a place more than a day or two they would just ignore you, because they recognised you and knew you weren’t interested. My mum got more harassment than I did, mainly from young men calling her a “beautiful gazelle” hoping to find an older woman with money. Haggling in shops is expected, and the shopkeepers like to sit down at a table and have a nice haggling and chat session with cups of tea for bigger items, but I never haggled particularly extensively. The initial price the shopkeepers offered never seemed extortionate, and I think it’s fair enough to charge tourists higher prices when they earn so much more than the local wages.

(Cats asleep in the sun by a stall selling paintings in Essaouira. The dog and puppy belonged to the stall owner, but the cats seemed to be affectionately regarded strays)