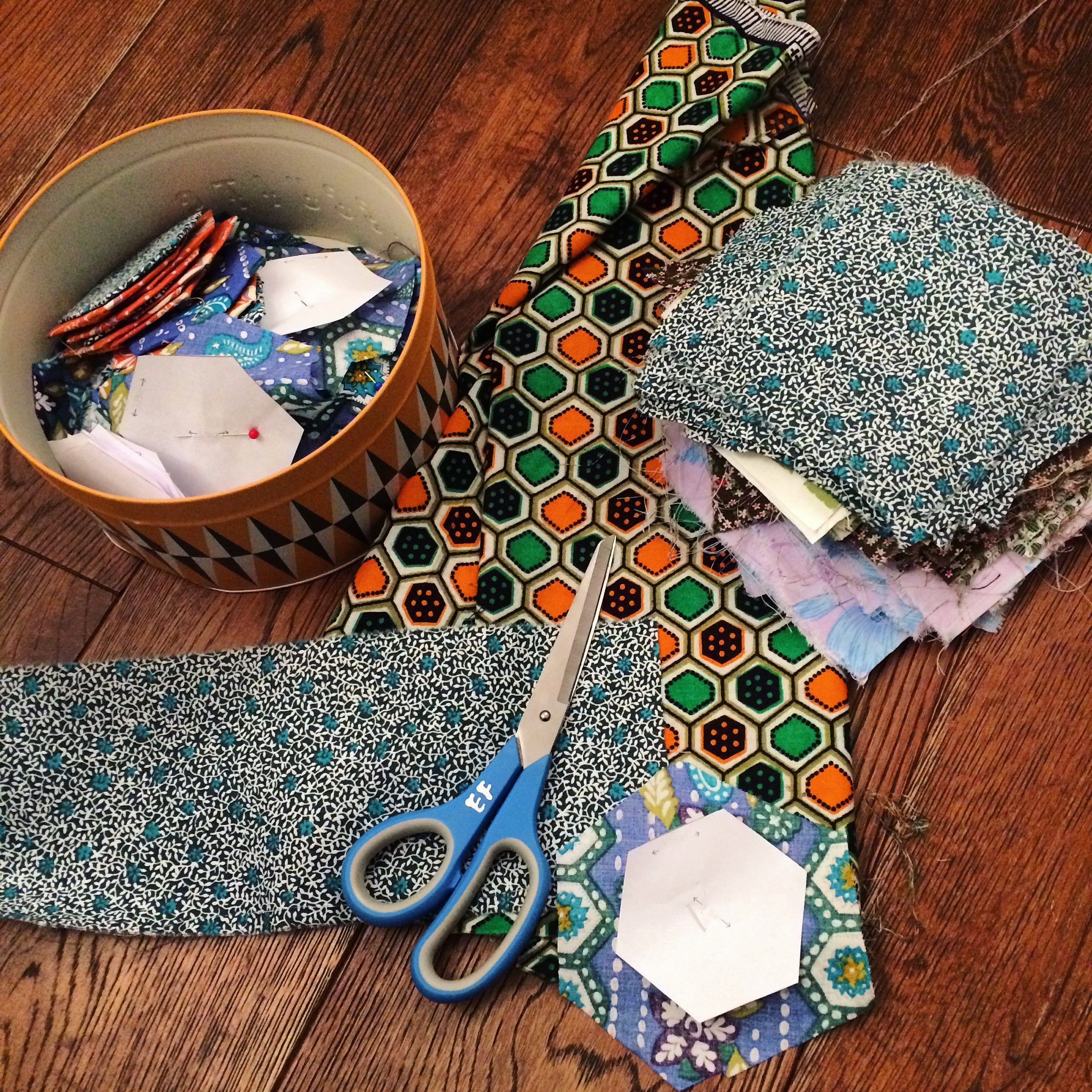 Patchwork quilt- a work in progress

For the past six months I have been hand-sewing a new patchwork quilt for my bed to replace the worn out one my nan made for me when I was a teenager. I’m still no-where near finished, but I’ve done the bulk of the work. These photos are from my Instagram account over the past few months, so they’re not as sharp as if I’d taken DSLR photos of the work.

For the past 17 years I have had a patchwork quilt that my nan made for me on my bed. She used pieces of old bedsheets she had around the house and scraps from her dressmaking business. It’s now seen countless house moves.

Just before Christmas, after many repairs over the years, it finally gave up the ghost. Some of the fabric started disintegrating, and the wadding inside had mostly disappeared into a handful of scraps. It was time to enter retirement. I packed it away until I bought a suitable frame recently, and then I framed a section of it that was still in one piece, and then unpicked any intact hexagon sections to reuse on cushions at a later date (it seemed a horrible shame to throw any non-ragged bits away).

Over Christmas last year, I decided to hand sew a new hexagon quilt myself to replace it. My nan died a few years back, and I was given whatever sewing supplies I wanted from her house. In the selection were chunks of some of the original fabrics she’d used in my quilt. I decided to use other scraps and remnants I had around for the other pieces. Patchwork quilts, at least in my book and by tradition, are meant to be an economical and environmentally friendly way to re-use sewing leftovers and unwearable clothing, not a way to spend a fortune on new fabrics. Hand-sewing a quilt for a double bed is not a craft for the impatient, but it’s also not a craft that needs any special equipment or costs much (or any) money if you use recycled materials. (You also have to iron all the fabric before you begin, every single piece once you’ve basted it, and the whole thing before you add the wadding).

The original quilt was made of hexagons appliqued to a flat base. For my quilt I decided to make it all hexagons, because I had so many scraps to use, and no pressing deadline to finish it. I’ve used the paper piecing hand sewing technique, which is the traditional way of making quilts in the UK, where you create each piece around a paper template which is taken out at the end (here are some free printable hexagons templates). Using the paper templates keeps all the pieces crisp and accurate, and matching up properly. You can learn how to do it here.

I used this online calculator to work out how many pieces I would need. It was around 400 hexagons. I wanted to make a double quilt that could be tucked under the ends of the mattress, because I like the tidy look that gives, and it also means that if you sit on the bed it doesn’t mess it up. The quilt my nan made was meant to touch the floor on a single bed, which meant it covered a double, but only just.

Making hexagons is pleasantly mindless, and is easily done while watching tv. Before you know it, you have a stack of ten to twenty you’ve made. It’s also a very portable craft. I’ve travelled around a lot this spring and summer, and been around building work, which has made larger sewing projects inadvisable (building dust and paint don’t mix well with sewing). You can take a sandwich bag with some hexagons, a reel of thread and book of needles anywhere. So for the last 9 months I’ve been making hexagons here and there, which are now mostly finished. I now have an assortment of sewn up hexagons in plastic sandwich bags in a milk crate, and also a biscuit tin full.

The next step is to join them up, as per the plan you can see at the back of the photo, which needed careful tallying of how many I had of each colour. Of course if you were buying the fabric, you would make the plan first, then buy enough fabric, but I was limited to how many blocks I could get out of each remnant I had. I didn’t just want to join up a whole load of small hexagon wheels, so I created this kaleidoscope pattern. (The hexagon grids are free pdfs from here – they also have almost every other kind of grid paper you could want for free). The next step is to sew all my blocks into the pattern, then add the wadding (natural cotton wadding from John Lewis- cheap wadding is a false economy for something like this that is going to be used daily) and a back, quilt round the edge of the hexagons, and then add the binding round the edge, so there’s plenty left to do.

(getting some expert help here)

Here’s an introduction to the pieces and where I got the fabric from:

Orange floral x 8– I actually have no idea where this came from, it had just been hanging around in my stash for years, too small to do much with

Green tennis dots x 14– a leftover from a dress I made a few years back. The fabric was £2 per metre from a street market stall of remnants I used to regularly go to. Sometimes they’d have pieces of amazing offcuts from clothing factories, and sometimes it would be total rubbish. You never knew from week to week. The collar and neck of the dress just aren’t right, so I need to unpick it and adjust the fit of the shoulders.

Apples x14– Again, a small remnant that I have no idea of the source of

Brown floral x60 – This was a skirt I got from a charity shop. Someone had made it themselves back in the 70s, but done it wrong. One side was cut straight, the other on the bias. When you walked, the bias side would slowly but surely creep up your leg until it was rucked up to the waistband, making it unwearable. I really liked the fabric, but there wasn’t enough cut on the same grain to make another skirt.

Paisley x22 & x12– This was one of the original fabrics. I fussy cut the pieces to give some with a floral paisley pattern and some with a chain of hexagons on

Green and orange “Liberty” floral x 48– I got this in the street in Paris for €3 at one of the “Coupon” stalls in Montmartre. (Coupon means offcut in French as well as a small piece of paper, a discount voucher is usually called a “bon” though). It was labelled “Liberty”, but no way is it actually by Liberty. For a start the print is wonky, and the grain of the threads isn’t true! I was hesitant to use it for clothes, because of the threads not being straight. That’s what you get with cheap fabric sometimes.

West African batik x48– This was a traditional West African dress with puffed sleeves (like this one) I got from a jumble sale for 20p because someone has spilt bleach down the front, making it totally unwearable. I bet the original owner was really sad, as it’s lovely fabric and was a really nicely made dress. You couldn’t use the fabric to make clothing though- the unbleached back was made of several shaped pieces sewn together, as were the sleeves. There was enough fabric left in the back and sleeves to make some patchwork pieces though.

Mystery fabric x88 (represented as purple on the plan) – I still need to make up some hexagons in a plain fabric. I definitely have some plain purple cotton somewhere that I can use.