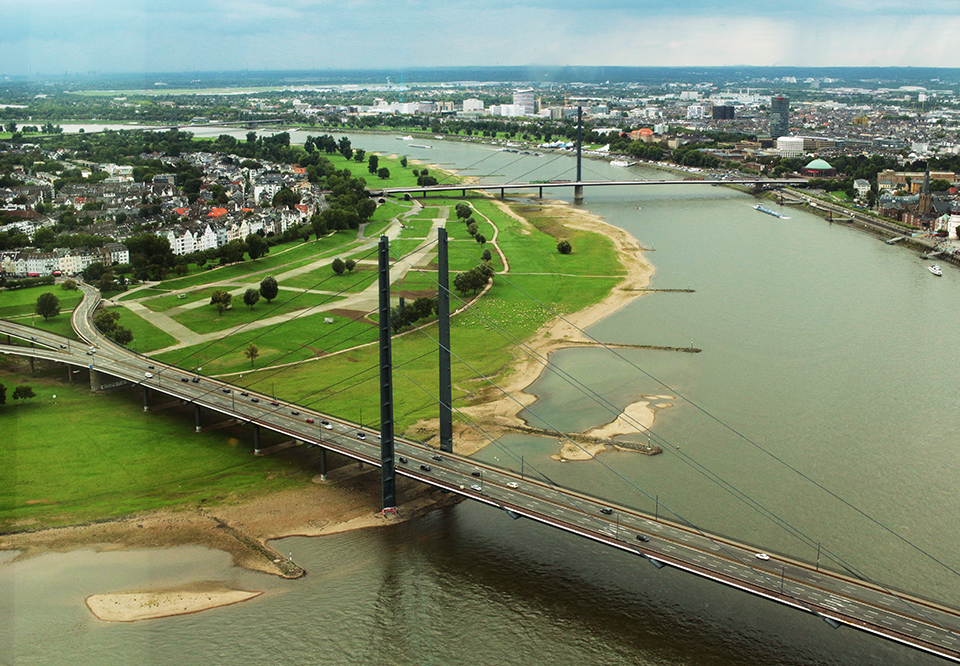 I spent most of August in Germany, teaching some school workshops and going to Documenta art fair along the way. My first assignment was in rural Nordrhein-Westfalen. The agency has a tendency to book you on flights at brutal times early on a Sunday, so instead I booked my own flight to Cologne on a Friday evening, and claimed it back off them. I have been to Cologne loads of times, and my colleagues were flying into Düsseldorf, which I had never visited. So I decided to stay in Düsseldorf, do a bit of sightseeing, and then meet up with the others before heading to the Sauerland. (A delayed flight and the questionable joy of rural DB trains on Sundays meant that that turned out to be a bit more complicated than planned, but everyone got there in the end).

I can’t say I knew much about Düsseldorf. It’s in the Rheinland, the most densely populated part of Germany, it’s a rich place with a big financial industry, Kraftwerk come from there, they say isch rather than ich (check out Kraftwerk’s Neonlischt), and they have an intense rivalry with their better-looking and more famous neighbour Cologne (to the extent of selling postcards everywhere saying “Düsseldorf statt Köln”- Düsseldorf instead of Cologne. Nice try Düsseldorf).

The centre of Düsseldorf is very posh- the Königsallee is full of expensive designer shops, and there are lots of expensive restaurants and gleaming modern corporate headquarters. It wasn’t really my thing. There are a surprising number of Japanese restaurants too- which I did avail myself of. There was cool looking modern art museum, but I got there too late for it to be worth paying to get in. The rest of the city isn’t quite so gleaming though, just kind of bog-standard Germany, and I stayed in quite a nice hotel for €30. There were a weirdly high number of stag and hen-dos/exam celebration groups in town too. There was an annoying group of Bavarian boys in lederhosen at my hotel. The sarcastic manager pointed them out to me and said “look, there’s some Bavarians in their famous sexy lederhosen. As a free gift from the hotel, you can pick one. None of their mothers will mind”. I declined.

Kraftwerk are famously from Düsseldorf. I made a trip to see their old studio Kling-Klang, near the train station (they now work in a bigger place out of town). It was cool to see, but is not going to occupy you for more than a few minutes. The street it’s on is both empty and seedy at the same time. I guess that’s how they could afford it.

This isn’t the greatest photo, but I really like how the tramlines in Düsseldorf are grassed over, with this chequerboard paving on the stops. As per in Germany the tickets are reasonably priced, and incredibly confusing. The ticket machine offered me a choice of zones, but the zones weren’t marked on any of the transport maps. Eventually it turned out all of Düsseldorf is in one zone.

I got a free voucher from the hotel to go up the Rheinturm. I was disappointed to find it didn’t rotate, but you did get good views. Before going in, I used the cash machine in this office building, and got this great view of the tower.

Here is the mighty Rhein itself, with some barges making some very slow turns. Earlier in the year I was actually right at the beginning of the Rhein, on the Austrian-Swiss border near Dornbirn. It’s more of a stream down there.

This building looks really cool from above.

The tower has some very reflective lights inside. The Photoshop content-aware heal tool is a marvel, it really is.