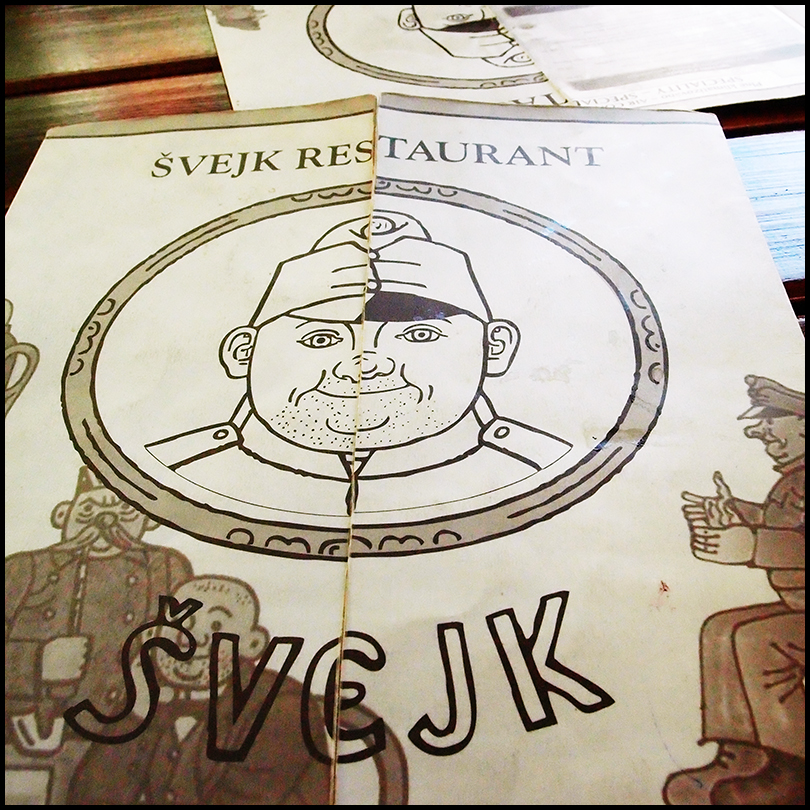 Literary Eating and Drinking in Prague

We didn’t have a long time in Prague, so we didn’t get to sample that many places, but the ones we did go to all seemed to be based on books. Fun, and a little strange. (And the beer in the Czech Republic is both very cheap and very good).

For dinner we went to a Good Soldier Švejk themed pub. The book is one of my favourites- it’s a dark anti-war comedy about Josef Švejk, a slacker soldier in the First World World who manages to constantly avoid danger by being enthusiastic, but totally useless. His superiors aren’t sure if he’s genuinely stupid or extremely cunning, and the ridiculous situations all the characters find themselves in parody the pointlessness of war and the stupidity of imperialism. It also has great illustrations.

The food in the pub was typical Czech dishes (ie pretty similar to Austrian food), and was tasty. I can’t actually remember what I had- possibly some kind of dumpling thing, but I remember it was good.

We also went to a V for Vendetta themed cocktail bar. We were walking past, Hazel saw it, and burst into uncontrollable laughter and felt we had to go there. Everywhere was decorated with the Guy Fawkes’ mask, but it was quite pricey (the sort of place where the barmen expect tips) and had a cocktail jazz duo playing in the courtyard. We drank Becherovka, because the cocktails were expensive. It was a very strange combination. The thought of Alan Moore sitting in there doesn’t really gel. .