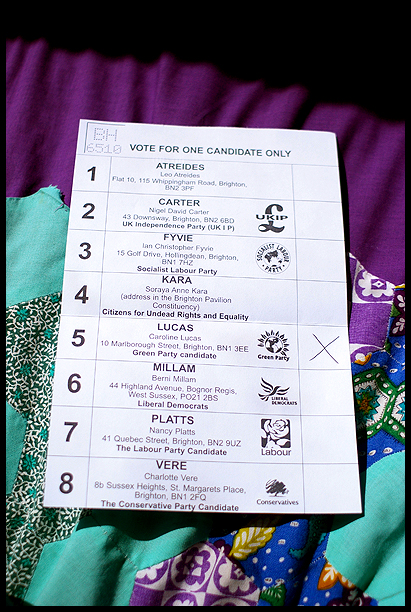 I used my postal vote today- I’m going to be away from home on polling day. I didn’t get to vote in the 2005 election, because of a registration mix-up, so I made sure to get it all done way in advance this time. It’s nice to see that the candidates in my area for the three big parties are all women. Caroline Lucas has a fairly good chance of getting in in Brighton, she’s the leader of the party, and they’re very popular locally. If she wins, she’ll be the first Green party MP. If she weren’t on the list, I’d go for the Lib Dems. That’s who I’ve voted for every other time. I have no idea who will win the election. I hope it isn’t smug orange plastic-faced Cameron.

And yes, that *is* a box for the Zombie Party you see there. In London, there’s also guy standing for Parliament in the character of a pirate, because he lost a bet: http://www.madcapntom.co.uk/