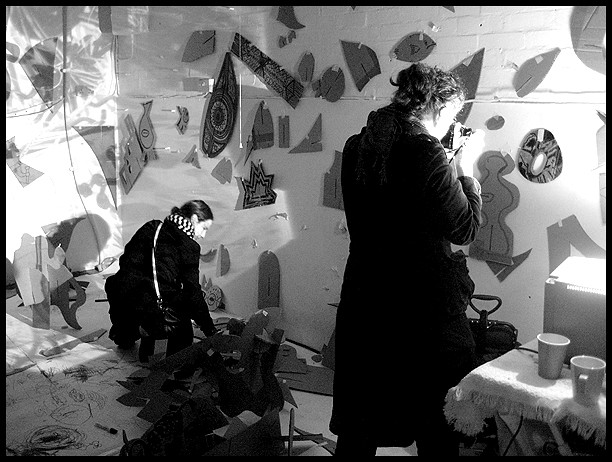 On Saturday I went to White Night rather than doing anything big for Halloween. It’s an all night art festival in Brighton on the night the clocks change. I knew some people who were doing stuff in it, and there was plenty of interesting stuff to come across anyway.

I met up with Vicky and Jack and we had a wander.

We went to the Open Market first. It usually sells vegetables and second hand bikes and junk, but it had been set up with all different art stands and lights for the evening. There’s a woman blowing giant bubbles here, but you can’t really see her.

There were installations and music and all kinds of things going on.

I really liked these shadow lamps.

Gallit, another student on my course, was doing an installation called The Big Draw. She had cut out loads of cardboard shapes and pinned them to the walls. Passers-by were invited to take a shape, paint it with indian ink and hang it back up on the wall and also to add marks to the projection.

Mine kind of ended up being a sort of skeletal seahorse type thing.

I also ran into Mark from my course.

Then we went along to St Peter’s Church where my friend Sophie was doing shadow puppets with projections in a tent for a band called Us Baby Bear Bones.

At the side of the tent was a place where you could colour in a picture of a monster.

On the way to the seafront we popped into Cafe Marwood, which was opening all night. My favourite cafe anyway.

They’d hung strings of paper cranes across the garden.

I caught myself a bird.

Aren’t I clever. Me & V made plans to make a lot of origami birds and string them up in the studio ourselves.

We wandered down to the seafront and saw all sorts of things like enlightenment booths (like a confession one, except you learn things inside), a big pink tent for thinking in (we didn’t do any thinking, stuck to drinking vodka out of plastic lemonade bottles) 80s dancers dancing on the bandstand, a giant bubble suspended from a crane with projections inside, assorted street performers and musicians and some really big queues for indoor stuff that we couldn’t be bothered to join. A good way to spend an evening.