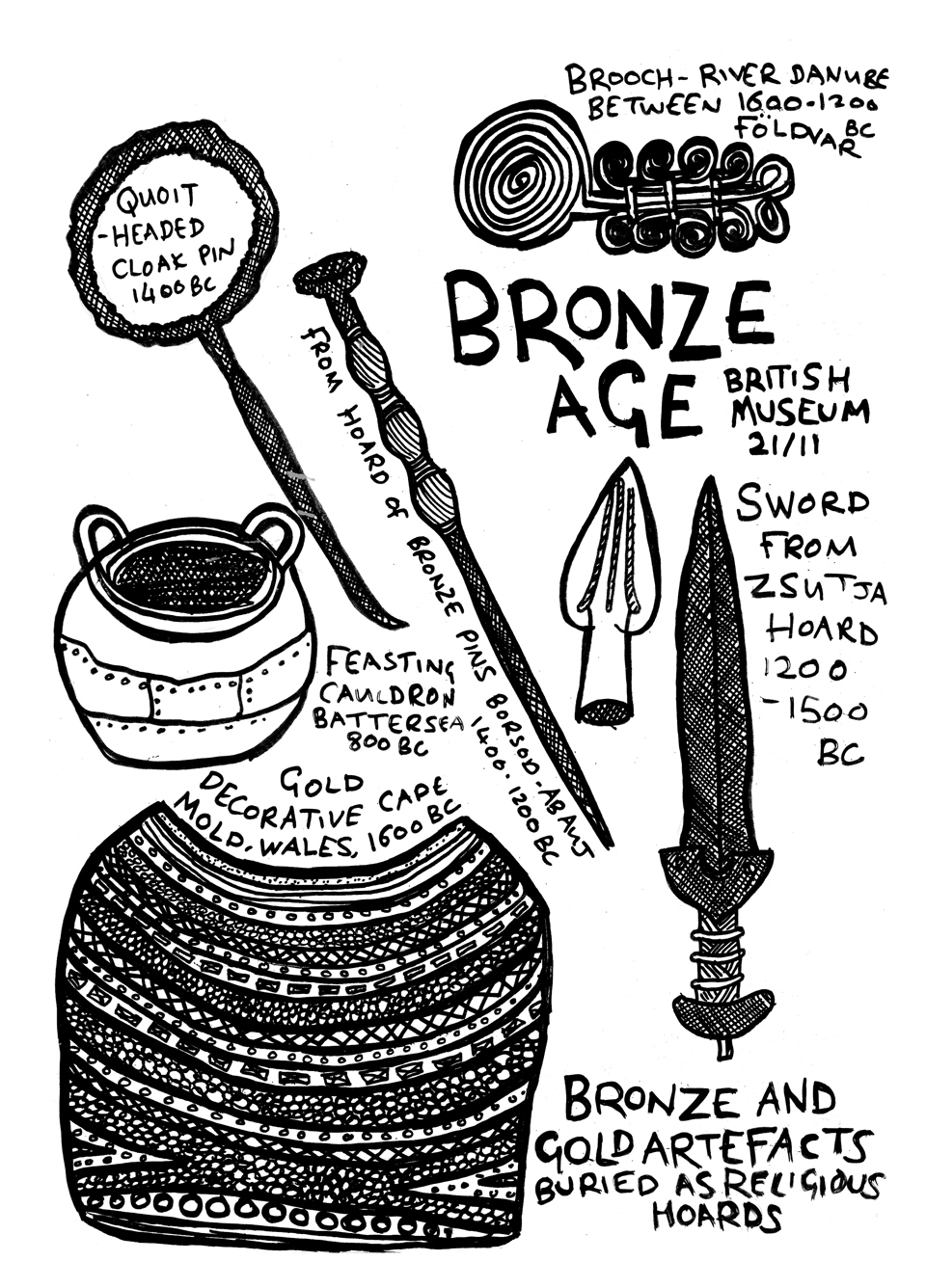 Here’s some more old sketchbook pages I scanned, this time from the British Museum. (Unlike the V&A they let you use pens and have plenty of stools to give out). The first one is metal grave goods from the Bronze Age, mostly from Central Europe and Wales. I studied Ancient History as my BA, and Bronze Age ritual landscapes and grave goods are something I’m particularly interested in. Something I’m well aware a lot of people will find horrendously boring. For the best grave goods though, see the Scythians, the nomadic horsepeople of the southern Russian steppes, Ukraine and Kazakhstan. Magnificent golden jewellery, carpets, embroidery and intricate tattoos.

These are some carvings of chickens from a mural from Lycia in the southwest of what is now Turkey. Not a famous item at all, so a nice uncrowded room to sit in. The British Museum has so many rooms that it’s almost impossible to visit them all in one day. I have visited them all over the years, and as most tourists cluster in the Egyptian and Athenian rooms, you often have the other galleries all to yourself. To be honest, the British Museum has so many treasures, they could easily send back the disputed items like the Parthenon sculptures and have lots of beautiful items to fill the galleries with (whether the items which no-one is currently clamouring for were themselves legitimately acquired is another matter, up until the 1950s or so, a lot of, or perhaps the majority of anthropologists and archaeologists were essentially robbers and con people- here’s looking at you Schliemann and your dynamiting of the ruins of Troy to get to the gold).

These sculptures are from 520-450BC as I have helpfully written on the drawing. This was the period when Athens was at its peak. People often have this idea that the Ancient Greeks, Egyptians and Romans were concurrent, but this is not the case. The Roman empire didn’t even get going (or even have emperors) until the first century AD, and the Egyptian civilisation lasted for several thousand years. Even with periods like the Trojan War and Persian War, people kind of conflate the two together and assume they happened close to each other. In reality though, the Iliad was written around 800BC (whether Homer was a single person or a kind of collective oral narrative tradition is something that is up for debate) harking back to glorious legends of the deeds of the Mycenaean ancestors around 1200BC, and the Persian war was 499-449 (please remember BC dates go backwards). The Greco-Persian wars were also recorded by actual contemporary writers too (whatever your opinion of Herodotus), and the Iliad is essentially an oral tradition written down four hundred years or so later. Troy was a real place on the coast of Turkey, and there is archaeological evidence that there was conflict there at about the right time, but who knows about Achilles, Menelaus and so on.

The era of these carvings was also the period of the Persian war (please do not see the film 300 for any kind of information whatsoever- don’t even talk to me about that film), and Lycia was on the Persian side. The Lycians/Luwians who lived in the area (and had their own language– which is likely to be the same one the Trojans spoke- Troy is not very far away) are one of the less famous civilisations of the era, mainly because they were surrounded by large bossy neighbours like the Athenians, Assyrians and Hittites.