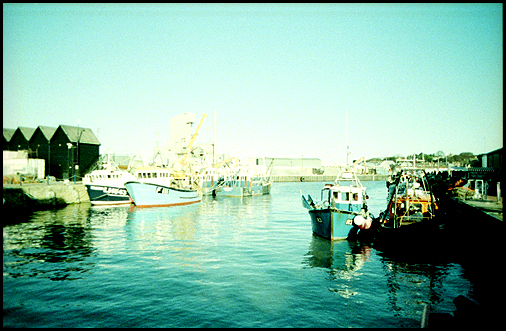 I used to do a lot of photography, but I don’t do half as much now, which is a bit of a pity. My flickr account (which I started in 2007) has 376 albums and 4976 photos. I thought I’d do some regular posts with photos from some of the older albums. I’ll tag them as “from the archives”, especially as a lot of them are from well before I started this blog, or moved it from blogger to wordpress. Here are some photos from a trip to Whitstable in January 2008. It was my birthday, and I went on a trip to the coast with my friend Bryony and our then boyfriends. I had this Kodak slide duplication film I’d got in a giant bag of expired film I’d got for 50p per roll a few years earlier, and kept in the freezer. I’m not sure if it was taken with a Lomo LCA or an Olympus XA2. I had both at the time. I still have them in a box under the bed, but they’re both slightly broken, because I got them very, very cheaply second-hand (I think they were both about £15). I should get round to fixing them at some point. I think they’re fixable. These pictures were cross processed in C41, and then scanned. The pictures on my flickr account are a little small by modern standards, but screens were smaller then, and storage space on Flickr limited. I still have the negatives filed away, anyway.