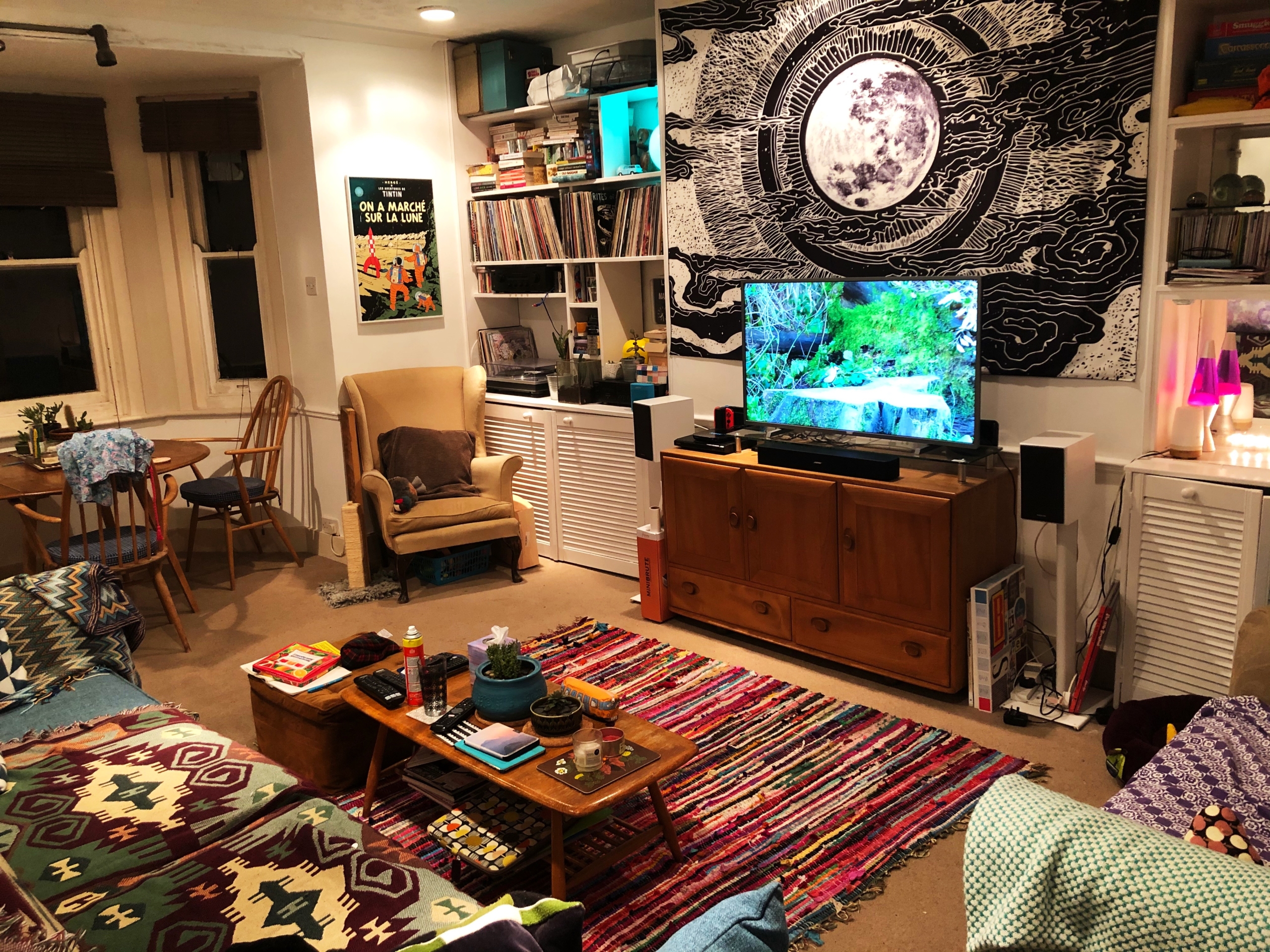 I was supposed to be in Austria right now running school workshops, but obviously that’s not happening. Like many other people right now I’m unemployed as my whole industry has stopped existing overnight. Seeing as I’ll be spending a lot of time at home in the foreseeable future, today seemed like a good time to have a big cleanup of the living room.

The previous owner of my flat was a terrible landlord who never fixed or renovated anything. The clapped out beige carpet came with the place, and I hate it, but currently can’t afford to replace it. When I moved in I got through about five cans of carpet shampoo to get rid of the old nicotine smell. Today while the cat was playing in the garden I took another chance to clean it.

The windows also desperately need repainting and servicing (they’re the original ones- about 150 years old) but that’s a specialist professional job, and again I can’t afford it right now

The beige armchair was here when I moved. I was going to give it away, but the cat adopted it as his throne. The Ercol furniture set was inherited from relatives.

The ebay moon tapestry hides a multitude of sins- in this case ugly metal bolts for wall-mounting a tv. I knew if I tried to remove them a giant chunk of plaster would come off the wall. The walls were also painted brown when I moved in. It took a lot of coats of white to cover up.

The small ugly sofa is from my old flat. I bought it from a charity shop, but they didn’t want it back, so I ended up bringing it here. The banana belongs to the cat.

This wall still has lots to do. I’ve got a load of prints to go on the wall, but not had the time or money to get frames. That will have to wait. The piece of paper with paint samples is from where I was considering painting the walls green. I decided in the end that I liked neither colour.

The big blue sofa is from DFS (of course from the never-ending sale). It’s the first time I’ve ever owned a new sofa. I originally wanted a standard four seater but they couldn’t get it up the stairs, so offered me a deal on two modules from a sectional set. I said fine, but was then amazed how huge they were when linked together. It’s the first time I’ve ever had a sofa you could lie down flat on.

The cat is very disgruntled because I moved things and changed the smells without his permission or supervision.

This is the Shame Pile- The books I’ve accumulated but not yet read. I feel this is going to come in handy.

There is a certain stripy person (naming no names of course) who lives in this house and likes to dig up plants, requiring pebbles on the surface of all of them.