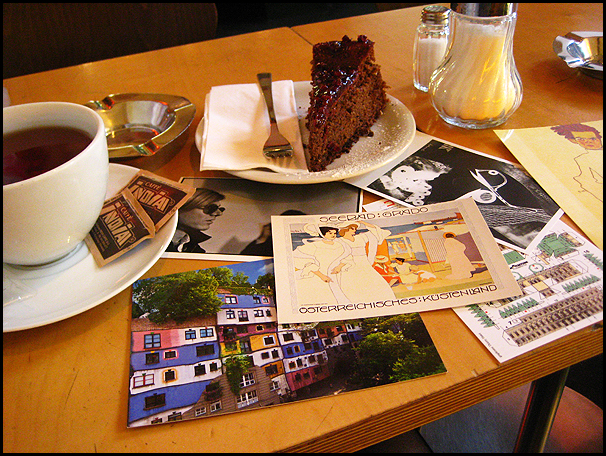 In September I returned to Vienna to teach another English in Action programme. I’ve got photos of galleries and exhibitions I need to sort out still. Here’s some odds and ends of photos of other stuff.

The company put me up in a hotel until the weekend, then I stayed with my friend Delal, an art student. Unfortunately I’d managed to catch the flu halfway through the week from the kids, so I pretty much spent a lot of time asleep on her sofa/going to stuff and then falling asleep too. It means I missed out on the funtimes. My return flight was from Bratislava, and I’d meant to do some sightseeing in the city (it’s about an hour from Vienna on the bus) but I felt so wretched I just went straight to the airport from Vienna. Flying with the flu is not fun, even if it’s only a two hour flight.

On my way out to places I always like to take the clichéd clouds through aeroplane window photos.

This is Vapiano, a cafe I went to near my hotel. It’s kind of like if IKEA ran a pizza place.

You choose the stuff you want, add the stuff to an RFID card, they give you a pager, and then when the pager rings you go to the counter to collect the food. When you leave the cashier takes your card and you pay up. The food was pleasant, but average, the futuristic method of ordering being the most exciting thing about the place. Turns out they have a branch near where I live now. I doubt I’ll be returning, there are so many fantastic restaurants in London.

There are plenty of good places to eat in Vienna, but they’re a bit scared of spices (and don’t get me started on the selection of food in the supermarkets …). These satay noodles with tofu were labelled “sehr pikkante” on the menu, but weren’t spicy at all. Still tasty though.

This is the Palmenhaus in the Stadtgarten, a short walk from the hotel. I would’ve liked to go into the cafe, but it was the end of the week and my funds were low. Round the corner is the Hotel Sacher, home of the famous Sachertorte. I was going to get Marcos one (his parents’ bosses had once given him some and he remembered it being delicious), but they were ridiculously expensive, and so I ended up baking him a large one instead, which made him pretty happy.

I am an incurable postcard writer.

Display I saw in a junk shop.

Bread in a traditional restaurant.

We went to this bar, Cafe Goldschlag to see a singer Mary Ocher. The bar is done up like a vintage living room and they sell glasses of beer or wine by donation. I had a nice time, despite falling asleep and having trouble getting my flu-addled brain to speak German properly.

Here’s Delal trying to get her most beloved camera to work again.

Drawing in the kitchen.

These were some chocolate bars with really great packaging I saw at Bratislava airport. I didn’t get any though because the shop was really hot and they were a bit melted feeling.