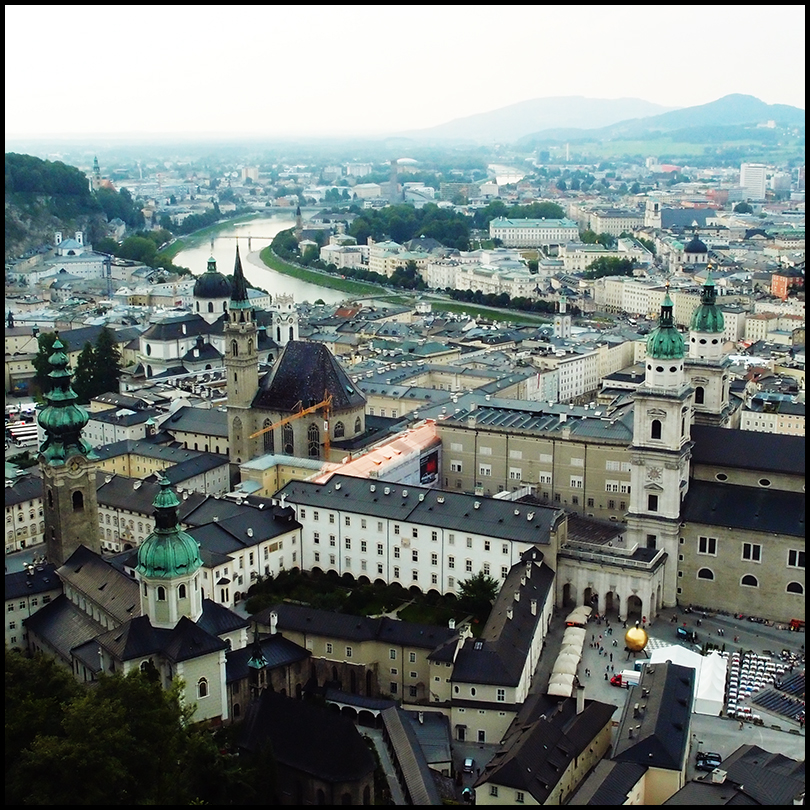 On the way from Niederösterreich to Vorarlberg I stopped off alone in Salzburg along the way. I had to change trains in Vienna, and after a week of hearty, dairy-laden alpine food I was very, very thankful to eat some dhal and chapattis at the station. I really, really liked Salzburg and would gladly return there. I don’t know what it is about the city, but it just had a really nice atmosphere. I arrived at about 5pm, found the hotel really easily, and dumped my stuff and went for a wander. It’s an old university town, with a castle perched on an outcrop of the mountain looking down. There is a stereotype in Austria that people in Salzburg are snobby, but I found them friendly enough.

I wandered through the old town, and made my way up to the castle via the funicular. I love panoramic views, but I’m also terrified of heights, so I have a tendency to force myself to go up to these places with shaky knees, gripping onto something for dear life, but being glad I made myself do it. At the top I had an overpriced coffee and slice of cake, but again, it was worth it for this view. There is no point in going to Austria if you don’t stuff yourself with cake at every opportunity.

I looked at these pennies and wondered if the urban myth about throwing pennies from high places being lethal was true or not.

A peaceful square at the top of the mountain.

Working my way back down into the town.

I like the wonkiness of the windows. It reminds me of the sets from the Cabinet of Dr Caligari.

At the bottom of the castle they had all these chairs and tables set up with a big screen. Not for football, however, but for opera. You know you’re in Austria . . .

I went in this gallery and had a really nice chat with the artist/owner Peter Gerl and bought some postcards of his paintings. Obviously I would’ve liked a real painting, but the budget didn’t stretch that far. I really liked the effect of the scratchy ink lines and gouache washes on the brown paper. It’s given me some ideas.

Then I had a walk along the river, and bought some Sound of Music souvenirs for my sister, who was obsessed with the film when she was younger. The next morning I had to leave early to get to the Swiss border, but I would definitely like to go back to Salzburg.