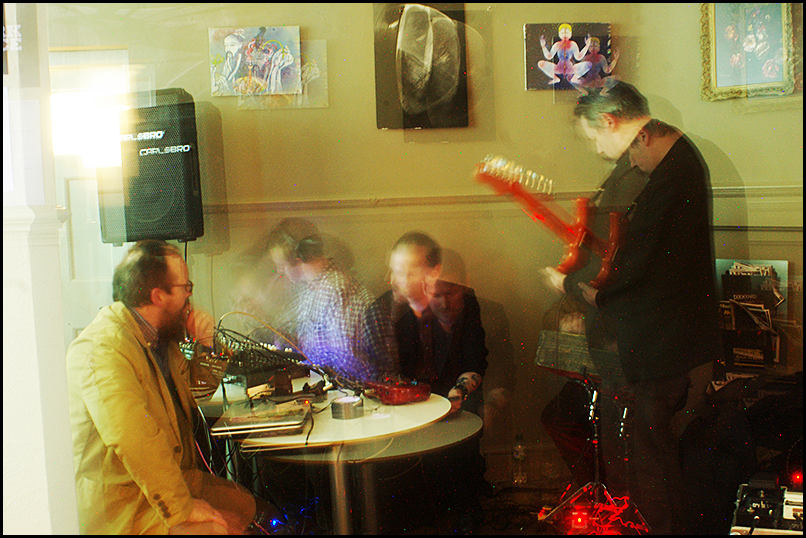 On Sunday night I went to my friend John Newman’s sound installation at the Deaf Cat in Rochester, put on by the TEA people. There was a Damo Suzuki improv gig the previous night when I was away. I’m sure they organise these things when I can’t come specifically to spite me. I also went to watch at their band dating event they put on on Thurs. They got musicians to fill out a profile, then assigned them to a band, gave them 2 free rehearsal sessions, then they played whatever they came up with on the night. It all worked out very well. There were soundscapes and something that sounded like a Talking Heads rehearsal.

I wasn’t sure if I’d be back in time from Sheffield to come on Sunday, but I said I’d take some photos for John if I could make it. He created a script to collect tweets featuring certain keywords such as noise, and then generate sound and visuals based on the text. That was shown, and there was improvisation from various people. I think that’s a good basis for bands to work on, get up on stage and join in when you feel like it, then get back down when you fancy a drink.

I brought a tripod and shutter release with me, and a box of tacky 70s filters, because why not. I was glad of the tripod and shutter release, because the cafe had no lighting, so these photos are all about 6-8 second exposures (hence the rainbow sensor dust dots, which I quite like). No-one was moving too much. The filters weren’t much good, because they tend to rely on there being points of strong light for their effect. There were William Burroughs films projected at the same time as the improv, but the layout of the cafe meant that they had to be on a different wall than that behind the musicians.

I also managed to do two things I’d meant to do for at least 3 years. Give Matt McN the boxes of sheet film I’d got for £1 each, and buy Shareef’s album. Matt has finished at art school, and doesn’t have the same access to the large format camera, and Shar’s old band broke up, but never mind. Champion procrastinating. Afterwards I went with Bee and Matt to the pub, and drank honey jack daniels that tasted like drinking cereal. Rochester Wetherspoons gives me the creeps.