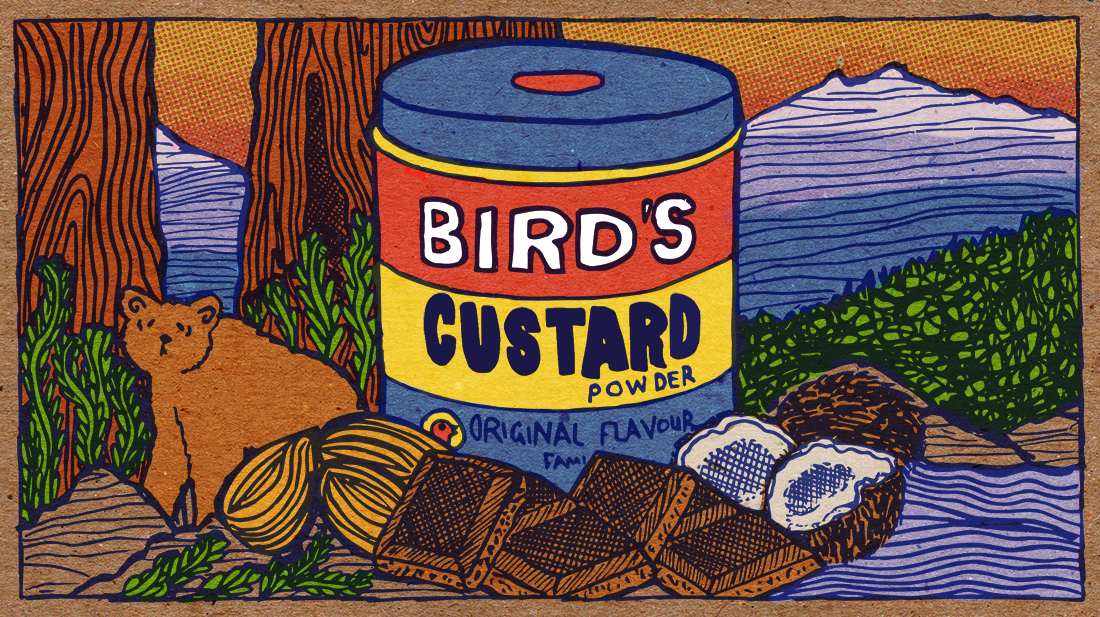 I was watching a BBC series recently about the history of the native peoples of the Pacific Northwest, and it gave me a hankering for Nanaimo bars. I used to have a co-worker from Manitoba, who would make this typical Canadian treat from time to time, and bring it in. Those were good work days. It’s something in between a millionaire’s shortbread and a cheesecake, requires no baking, and is totally delicious. As well as the standard vanilla filling, mint or coffee variations are also common.

Nanaimo bars originated unsurprisingly from the city of Nanaimo on Vancouver Island. If I had drawn pine forests, Mounties, beavers or other Canadian clichés for the illustration, it would have been all wrong. That part of Canada is more redwood trees and continual rain. I’d very much like to visit that part of the world, but a trip’s too expensive for me right now. Vancouver is a very pricy city, and my closest friends live in Ontario and Oregon, so I’d have to shell out for a hotel.

As well as the beautiful mountains, rainforests and bays full of whales, British Columbia is known for the sculpture and artwork of the Tlingit, Haida and Salish people and other local groups. Watching the documentary, I felt it must be very frustrating for the local archaeologists. You have a region where there’s a 10,000 year unbroken history of civilisations known for their expert sculpting, boatbuilding and weaving, but also one of the wettest climates on the planet, so all that cedar wood and wool rots away very quickly.

A blog from that area I like is The Woman Who Married a Bear. The writer Milla is a Finnish woman who lives with her partner on a small island in the Salish Sea in between the USA and Canada (their island is on the US side). She is a herbalist, and he makes traditional tools used in the local sculpture and boatmaking techniques. The blog focuses a lot on nature and life on a small island and has a lot of beautiful photos.

The city of Nanaimo has a free recipe for the toponymous bars on their website, but it uses North American ingredients and volume measurements, and has a semi-cooked egg in the base that didn’t seem entirely necessary. So here’s the vegan version I evolved by trial and error, using metric weight measurements and ingredients found in every British supermarket. The recipe is vegan, and can also be easily made gluten free with a few substitutions.

To make the base:

To make the filling

To make the topping

Once completely set, cut into small squares. Keep in the fridge.