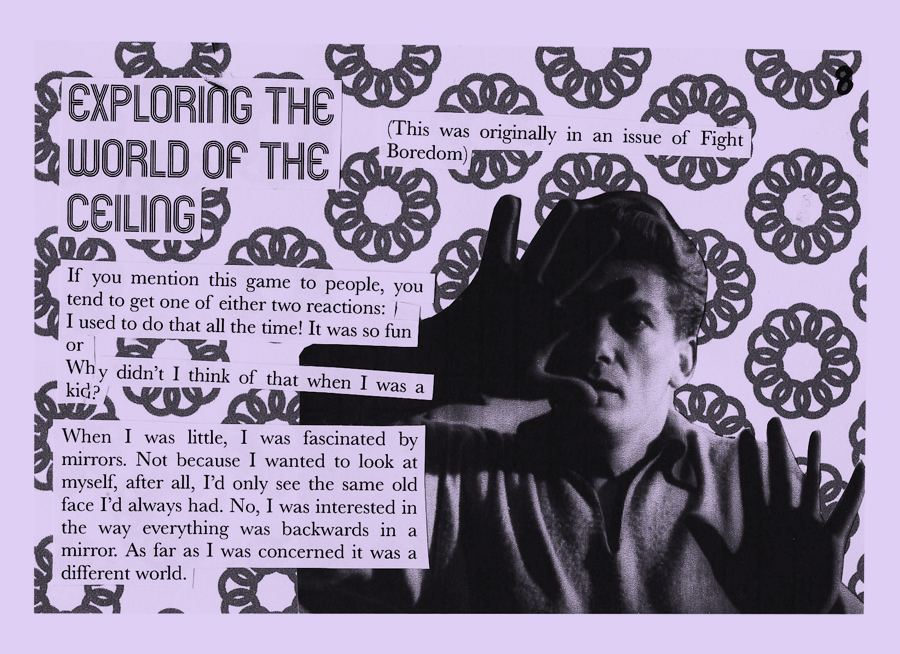 My zine, Fanzine Ynfytyn, is named after a song by Welsh language post-punk band Datblygu (“Develop”). The name could be construed as either “Fanzine Idiot”, “Idiot Fanzine” or “Idiot’s Fanzine”. People either look at the name with bafflement, go “uh, is it Welsh in some way?” or are pleased because they know the song (those people get a free copy). In some ways I regret giving it a name that so many people struggle to pronounce or understand, but I’m on issue 22 now, so they’ll just have to get used to it. When I started it, I only expected to give a few copies to some friends who were already familiar with the song, so it wasn’t really a concern (I also had a mini collage zine called “Pobble Eh Come?” like a really mis-spelt version of the soap opera). Seeing as one of those people was a fellow language student penfriend who I had a running joke with of us mangling Welsh and German together to make one überbendigedich language, I wasn’t too worried about the palatability of the name. I was never expecting to get to issue 22, and have sold or traded hundreds of copies of some of the back issues and have them in libraries and academic collections. I was surprised I got to more than a couple of issues to be honest.

I’m not Welsh, and didn’t go to school in Wales, but I have a fairly decent passive grasp of the language (I’d struggle to carry on a conversation). I have some relatives who are native Welsh speakers (they’re relatives by marriage, but their son is the same age as my sister’s son, so we used to see a fair bit of them), and more importantly, I spent my teenage years listening to the Super Furry Animals and Gorky’s Zygotic Mynci, bands who did songs in both English and Welsh.

I got into Datblygu through the Super Furries. They covered the song Y Teimlad, and talked about how great Datblygu were in interviews when promoting their Welsh language album Mwng (“Mane”) about 15 years ago, so I thought they were worth checking out. I went into my ever-reliable local second-hand record shop, Magic Discs, and asked if they had any Datblygu, thinking it was a long shot. The guy immediately pulled their album Pyst on vinyl out from a mysterious box somewhere out back and charged me £7. They really were magic, and sorely missed. I then ordered the Peel Sessions album direct from Ankst, who thoughtfully sent me a dvd of Welsh language music videos, including one of a man wrapped in clingfilm rolling round on a sandy beach and spitting out milk.

My £7 wasn’t wasted. I immediately took to the album. The comparisons to the Fall make a lot of sense, but David Edward’s lyrics are more specific and personal than Mark E. Smith’s, and the music tends more towards the electro-pop side. The lyrics are in Welsh, but mainly talk about how shit living in Wales in the 80s was with sly humour (including getting thrown off Welsh language TV for being “unpatriotic” for lines like “Living in Wales is like watching paint dry” in Gwlad ar Fy Nghefn- Land on my Back, which is a pun on Hen Wlad Fy Nhadau- Land of my Fathers, the Welsh national anthem, and also calls to mind yng nghefn gwlad/cefn gwlad- rural / lit. back-country or “Outside somewhere two people meet, to screw like it’s the first time they’ve met, but Ben Bore’s dreaming with the lights off”). I picked up a fair amount of the meaning from listening, but certain phrases escaped me until years later when I bought the cd version of the albums I already had on vinyl to get the lyrics book that came with it (comprehensive information about Datblygu is hard to find online), which made bits like the first half of “Pam wnes i trafferthu mynd a’m mhoteli gwag Whiskey i’r banc poteli’n Aberhonddu?” (Why did I bother to take my empty whiskey bottles to the bottle bank in Brecon?) a lot clearer. John Peel said that the music of Datblygu was as good a reason to learn the Welsh language as any.

I also recently bought a copy of Dave’s book, Atgofion Hen Wanc, the first and perhaps last book I’ll read in Welsh. I’ve only read the intro so far, with the aid of a dictionary/geiriadur (the University of Wales have a great free online and app one) because I’ve been short on time lately, but it wasn’t too hard to understand. Having an electronic dictionary helps a lot as well, because the initial letters of words can often change in Welsh following grammar rules, and it means you don’t have to know every rule. I must say though, that I was relieved when the book came in the post and turned out to not be particularly thick.

Here’s a video of the song my zine is named after, and the lyrics. There’s two different versions around, the album version which has a more syncopated rhythm and some good ghost and clapping noises, and the more dissonant Peel Sessions version, which I’ve used for the video and included on the Spotify playlist at the end. The lyrics seem to be taking the piss out of a very specific type of repulsive teenage boy, convinced he’s Morrissey the Second.

Fanzine Idiot
Manchester forever
And all his uh-huh songs

And there’s jelly on the cassette head,
The cassette player in his bedroom.

Here is a playlist of Datblygu songs for your listening pleasure.