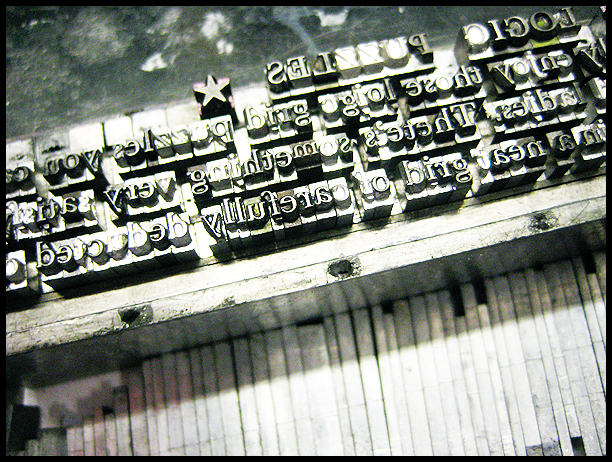 The occasion of my 26th Birthday: in which I venture lead poisoning and eat a lot

I’m doing an art MA at the University of Brighton. I was living in Brighton, but I’ve moved back in with my mum in Kent recently because I ran out out of money. I only have to be there in person one day a week though, so commuting’s ok. My stuff still wants unpacking.

This was the day I turned 26. I went to university, did some typesetting, and ate and drank a lot.

Obligatory bedhead photo. I’m not a morning person in the slightest.

The time. The kermit clock was the best 20p I’ve ever spent.

Some presents from my mum, and ones that my dad dropped off the day before from him and my brother. The post didn’t come until after I’d left. The mother unit did not wish to be photographed in her leopard print dressing gown.

An extra pair of converse (I already had been given some black ones that I’d been wearing already), Jan Svankmajer shorts dvd (lots of eastern european folktales on that), hairslides and some much needed money.

A nice healthy breakfast. If I can’t do it on my birthday, when can I? Marks and Sparks, you’ve done me proud.

Turn on my decrepit laptop.

No important emails apart from some birthday wishes. I also share my birthday with Jack London (pleased with that), Sporty Spice, Des O’Connor and Heather Mills (indifferent about those three). Guess I’m destined to either be an author or end up in an acrimonious divorce suit.

Print off my stuff for uni. My next project is an animated film of the story of Pentheus and the Bacchae done in the style of greek vases. I’ve only just started though.

Oscar: “My belly needs tickling”. He fell in the bath last week because he got too curious about the running tap, then ran around the house meowing pitifully.

Showetime for me, with the cats firmly out of the bathroom. I didn’t wash my hair, because I thought it didn’t need it. I later came to regret this.

I must admit, by the end of the jumbo-sized bottle, I’m pretty sick of the scent of the lavender one. I think next time I’ll get rose or peppermint. Clean teeth, wash face, try to hide evidence of spots, blah, blah, blah.

While getting dressed, some music. Good old spotify. The cables for my stereo are somewhere I haven’t discovered yet.

I got this dress with last year’s birthday money, but have never worn it. The bust fits badly, I think it was meant for some early 60s person who hoiked their boobs up in a cone bra, not a practice I indulge in, and who also was a bit shorter than me. I felt it was about time I wore it.

Ended up putting a t-shirt and cardigan over the dress. Here you can see my room in chaos. I still need to unpack everything and find a home for it.

My mum gives me a lift to the station. Normally I go on a tuesday and stay overnight with friends, but I’ve got nothing scheduled in the morning, because the tutors are marking work. Delightful english weather. Surprisingly I don’t see anything on the way that makes me cover my face and feel deeply ashamed of my hometown, but somehow amused at its scumminess.

The camera sensor and station screen don’t get on, but it says something like St Pancras train in 5 minutes, Victoria in 10. My ticket covers both, but there’s no point getting the St Pancras train and going further north than I need. The route I have to take is a little stupid, go into Victoria at platform 1/2, go to platform 17/18/19 and get a train that follows exactly the same route south for about half the journey. All the transport is centred on London.

I attempt to do some preliminary sketches on the train. It’s so wobbly and bumpy that they go a bit wrong, and I end up with a host of chinless Ancient Greek wonders and give up. The people in my film will be made of cardboard, Captain Pugwash style.

Dionysus came out a bit more useful, although you can see where I went over a bump when I was drawing his nose. I like his leopard paw scarf. I like to be strict with myself and draw straight in pen so I have to get the line right first time. This doesn’t actually mean that I get the line right.

Grab some sushi and run to get my connection.

Hello to Battersea Power Station for the second time in 15 minutes.

Rather than waste pages of my sketchbook I start writing a letter to my friend Kira.

I arrive into a wet and misty Brighton at about midday.

On my way into art college I get some bits from 2 Brighton institutions.

Resident Records. My terrible poverty always strikes me hardest in here. They’ve got a sale rack the moment, it being January though.

I got this Pains of Being Pure at Heart EP for a fiver. Most of the stuff I wanted was more like £12-15, and I just can’t afford it at the moment.

Infinity Foods next. I like to go in here for the smell alone sometimes.

To get a snack and some more face wash.

When I get to college, I drop off some film at Photographic Services and head to..

Letterpress, to work on my typesetting project. I’m making a small zine to practice hand-typesetting. Here’s my typecase. 10pt Baskerville.

I have to take two lines out, because my address has changed. Putting the letters away takes far longer than taking them out for some reason.

Ah, moveable type. I’d love to have a go on a linotype machine too, but the college hasn’t got an operational one.

There’s no-one else in the studio, so I mess around and take a silly picture. There’s something satisfying about the big wooden type. Behind me are the blocks for filling up the blank space on your page. I like the abundance of little wooden shelves and drawers in the letterpress workshop.

Before I know it, it’s lunchtime, and I go and get some lunch with Judith.

Vegetarian burrito and sparkling apple juice. The university food is very cheap, and surprisingly good. I think a real mexican person would burst out laughing at the “burrito” though. I was very tempted by the sticky toffee pudding on offer, but I needed to save cake space.

Then I went back to letterpress and set some more type until about quarter past three. I didn’t take any more pictures because the place was full of cooler-than-thou graphics undergrads and I didn’t really want to have to explain what I was doing. Check out the lead marks on my hand! I did a galley proof, and realised there were several mistakes that I’ll have to correct with the tweezers next week. I don’t do them now though, because…

Chocolate pistachio cake and lapsang souchong tea. The bacon of tea. (You can tell it’s a long, long time since I’ve actually eaten any real bacon). The cake was delicious, but a bit overwhelming.

A bracing walk in gale-force winds along the seafront is exactly what’s needed to ease the cake down.

We decide to go on the pier. When it’s lit up it reminds me of that bit in Spirited Away when the bathhouse suddenly lights up. The pier is pretty eery on winter evenings when it’s empty and surrounded by stormy sea.

We get 50p’s worth of amusement from the 2p machines. I reckon they glue some of the pennies on to make you think you’re about to cause a cascade.

A pair of hardened gamblers.

Then I have a lecture called “Reading Objects” about collecting things and figuring out what causes people to make bizarre items from George Hardie. Highly entertaining and thought provoking.

Chatting to Lenka and Elly before the lecture starts.

George, who’s my supervisor, lends me this book. It’s a book of texts (in Spanish) and art based on the story of Orpheus. I don’t actually speak Spanish, but because I know Italian and Latin I can read it well enough. It’s a lovely book.

After the lecture, the tutors and students always repair to the pub. People keep buying me drinks and giving me posca markers, which is nice. The pub is dark, so I don’t bother taking any photos, because I’m not a fan of bog-standard flash. (Jack Daniels, if you’re buying …)

After the pub, I hot-foot it over to Kemp Town again to meet some friends (Vicky, Jack, Rachael and Amy) at a Thai restaurant. The relentless drizzle makes my unwashed hair feel horrible. Here’s Jack and Vicky.

Presents. I wonder what the tall one could be?

The waitress brought out banana fritters. I’ve never had icecream with candles in before. Rachael took the photo. We shared the fritters.

Time for me to go back on the train, because I got a day ticket. Dear man ineptly trying to chat up an (increasingly unimpressed) girl: you sir, are a charmless oaf. Dear man talking loudly into your phone about business in an interesting kind of franglais: you are also pretty irritating, but at least you’re linguistically interesting.

I decide it’s time to test out my new markers. Inspired by Mr Franglais: the life, death, and general drama of the common or garden pipe.

I don’t have time to take a photo when I change again at Victoria.

I get home about quarter past twelvish. “Where have you been, and why don’t you love us any more?”

Some presents from my sister. More markers (I do get through the black ones at a rate of knots), fuji instax film, and a book about story structures. I want to get the Raymond Queneau one too and compare.

I stick the Pains of Being Pure at Heart record on. It’s good, but the same as their album. I have to listen with headphones right now, until I uncover the speak cables and get round to going down to Maplin’s and getting some new fuses for the stereo amp. I don’t normally keep jars of marshmellow spread up here, it was a present (exotic foreign food!) that I haven’t got round to putting in the kitchen yet.