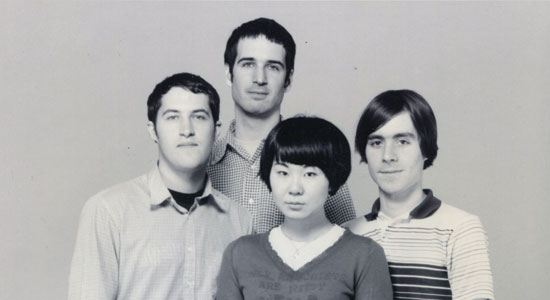 When I wrote the 50 Things About Me entry a little while ago, I started creating a playlist of 50 favourite songs. It got unwieldy and didn’t flow well though, so I gave up. Instead I’ll write a little bit every so often about songs from the list.

The Van Pelt are not famous or well-known outside a small niche. The singer/song-writer  Chris Leo’s brother Ted Leo is much more well-known, and bass player Toko Yasuda has had success over the years playing with Enon, Blonde Redhead and St Vincent, but they never hit the big time. Instead they released two quietly treasured albums in the mid-90s (Sultans of Sentiment and Stealing From Our Favourite Thieves) and then disbanded- they’ve released a collection of sessions that were intended for a third album (Imaginary Third) and done the odd reunion tour (I was lucky enough to catch one in London-it was a very special evening) but I’m guessing only a small selection of my readers will know them.

They can be loosely classed in the post-hardcore genre, but they used the sound to create something with space, sparseness and a sort of philosophical intensity as well as emotional. I guess you could compare them to Modest Mouse but less frantic, or Slint but less searing.

The song references the Zen Buddhist story of Nansen killing a cat- from sweepingzen.com

“One day at Nansen’s temple in old China, the monks of the eastern and western halls were arguing over a cat. Maybe they were arguing about which residence the cat gets to live in. The eastern people wanted it with them, or the western people wanted it with them, or neither of them actually wanted it, since the cat demanded a lot of attention and during zazen it would curl up on their laps which disturbed their concentration. Or maybe they were just arguing about whether the cat had buddha nature or not, or debating what is a cat anyway? Zen monks can come up with an argument about anything! You’d think they would have better things to do in a Zen temple than argue over cats, but that’s what they were doing on this particular occasion. And when Nansen, their teacher, saw this he held up the cat and said, “If you can express something, it won’t be killed.” The group had no reply so Nansen cut the cat in two.

Later in the day, Nansen’s great disciple Chaochou, who liked to talk about dogs, came back to the temple. Nanchuan brought up the incident and asked for his response. Chaochou immediately took off his sandals, put them on his head and left. Nanchuan said, “If you had been here you could have saved that cat.” Chaochou brought forth a true expression and his teacher seems to have approved it”.

One interpretation of the story it that it’s supposed to illustrate the dangers of being too detached, too enlightened, unable to actually engage with the world, too attached to rhetoric and theory rather than action. Another interpretation is the opposite- that you need to detach cause and effect and action on the world, and stop trying to analyse and intellectualise to achieve true enlightenment.

Chris Leo was brought up Catholic, and rejected it, but he doesn’t seem to have taken to Zen Buddhism or detaching from the world at an intellectual distance either. Ponder this to get nearer to Nothing. Nothing stinks. I guess I can relate. It’s easy to be an observer until you wonder if you exist, but it probably doesn’t do you any good.

Here are the lyrics:
There it is, plain and simple.
It destroyed itself without any of my slander.
This is the lunacy by which we kneel.
This is the doublespeak by which we kill.
This is the inertia that keeps tradition feared.
This is the absurdity by which we walk barefoot with shoes on our heads.
Ponder this to get nearer to Nothing.
On top of the world, think about it, there’s Nothing.
An unseasoned meal, monotone spirits, routine homily.
Nothing has never been clearer.
So kill a cat to keep logic at bay, then eat my body’s finest and fell me how it tastes.
Is it Nothing too?
Does it stink like Nothing?
Does it poison like Nothing?
(copyright Chris Leo)