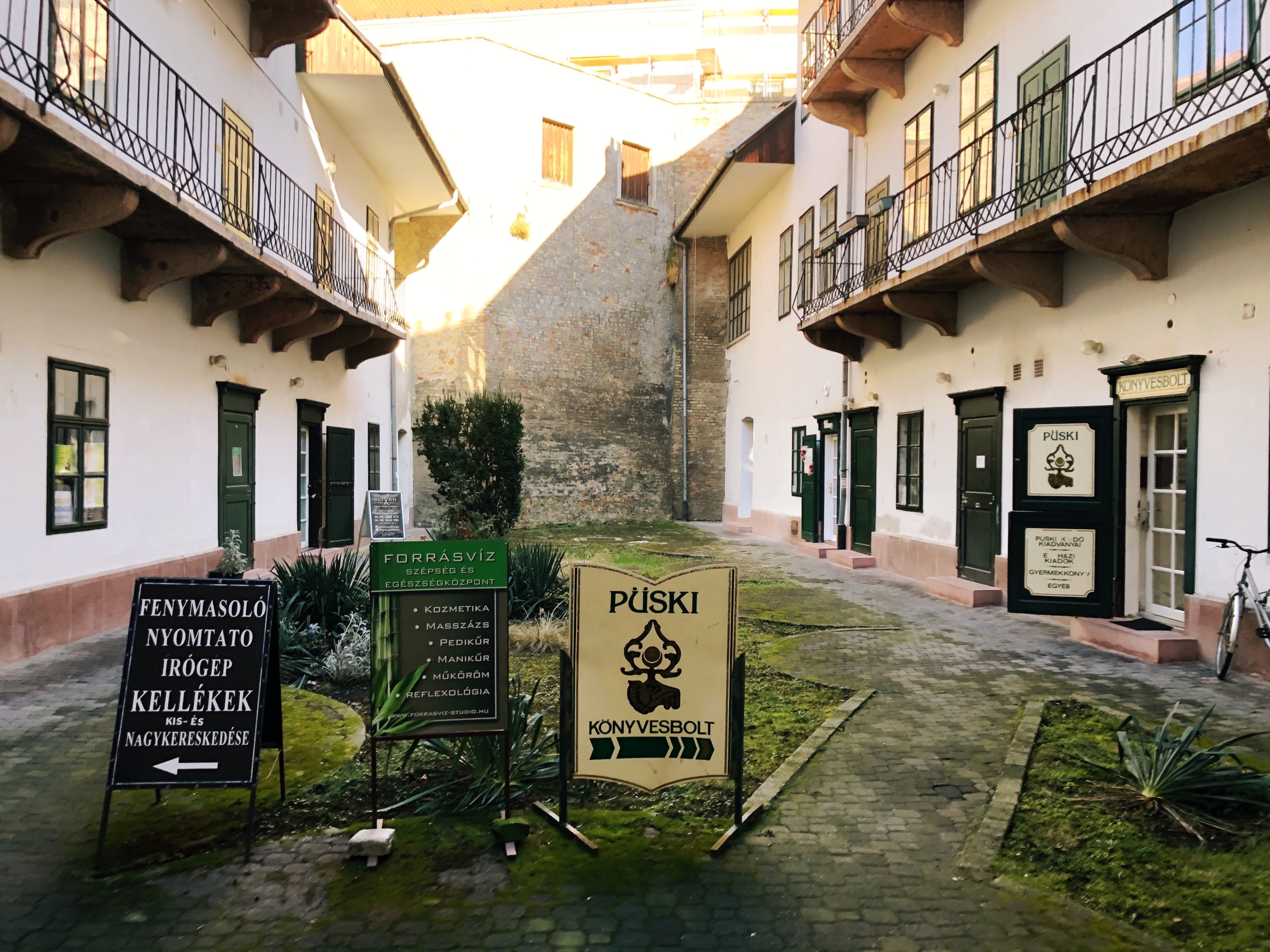 After working in Vienna for a week I headed off on the train to Győr in Hungary. It’s the regional capital of NW Hungary, and exactly halfway between Vienna and Budapest. I’d never been there before, and it was an easy train journey from both Vienna and the tiny village on the Austria-Hungary border where my next work assignment was.

Really, Győr should be thriving, but it’s not. It’s a university town and regional capital exactly 1 hr from Vienna, Budapest and Bratislava, with excellent transport links. There’s a really pretty old town on the Danube, and there should be lots of tourists. Instead there’s closed down restaurants and shops, and plaster falling off the walls in the old town. Victor Orban’s authoritarian, xenophobic right-wing rule is definitely hurting Hungary economically. It’s also noticeable in comparison with Slovakia, where despite dealing with corruption problems, it’s clear they’re doing a lot better than Hungary.

The outskirts of Győr aren’t as pretty as the old town. Communist era blocks were usually a little bit nicer in Hungary than other Iron Curtain countries though.

Boutique in the Old Town

Cobbled streets in the old town.

Historical map in a second hand bookshop. Despite the cool design, I probably would not want a poster of this. Maps of the era when Hungary was a big important country including most of Slovakia, Croatia and Ukraine are very tied up with rabid nationalism in Hungary. Lots of angry old gammons ranting about how the Slovakians have got some village that used to be in Hungary until 1918.

Courtyards in the old town.

At DM- the central European equivalent of Superdrug. Prices in Hungary hurt your brain. The exchange rate was about 400ft to £1 that day. A little bit easier than when I was living in Hungary and it was 360ft to £1. I actually bought some of these vegan toiletries in Győr though, because they were about 30-40% cheaper in Hungary than Austria. I really recommend this DM house organic brand, it’s both cheap and very high quality.

Map of the city centre along the Danube

Entrance to the local park.

The train station goods yard on the other side of the park wasn’t quite so glamourous.

This place looked intriguing, but was closed. An ultra-cheap buffet restaurant that seems like it’s been there since communist times unchanged. Here’s some interior photos from Google Reviews. Probably not great for me as a vegetarian though. There’s also some great photos here from the 70s when it seems like it was quite a posh establishment. Hungary had a lot more luxuries than most of the other Iron Curtain countries.

Fancy drain covers. Wonder how often they make junior school kids do brass rubbings of them as a school activity.

Backstreets of the old town. The restaurant was closed.

Fancy door knockers. No responsibility taken for any magical happenings resulting from knocking on or unlocking that door.

Memorial on the university law school wall. This professor was one of the people who was executed by the Soviets for his role in the 1956 Hungarian Revolution where the Hungarians attempted to throw the invading Russians out. Unfortunately Stalin came back with the tanks and executed everyone involved.

They love yellow and green tinted glass in Hungary. My flat in Budapest was a very similar design (except with a corner balcony).

There are still lots of remaining coal chutes in the old town. Every time I walked past one I was tempted to throw something important like my phone or passport down one. Even in the 80s a lot of these houses would have been heated with coal still, with the matching stains on the buildings.

The bishop’s palace. I don’t know if there was a bishop there or not in the communist days, but there seems to be one there now. Hungary is mostly Catholic.

I ended up having the set vegetarian lunch in the fanciest restaurant on the town square for £12.     Not many places were open. Yes that is a whole pizza slice of garlic bread floating in cream of garlic soup.

Lots of buildings in the old town have these courtyards, often with small shops on the inside as well as on the street.

There’s a lot of crumbling plaster around town, even on official buildings.

This is the Law Department of the University.

I cleverly matched my luggage to my guesthouse room. I was thrilled that there was a washer and dryer there, because when you’re travelling around for weeks at a time for work, often to obscure villages, chances to do laundry are rare. The washing machine then broke down with my clothes in, and I had to leave without them, and get the owner to wash them again and post them to me. That was fun.

Second hand book stall. All books £1. Despite the amount of closed down restaurants, Győr at least has plenty of book shops as a university town. Hungarians are big readers, and books are translated quickly into Hungarian, despite it being an obscure language spoken in no other country and not related to any other European languages except Finnish and Estonian (and very distantly).

Also with Hungarian being such an obscure language, people are very used here to products in shops being labelled with whatever language with a small Hungarian sticker stuck somewhere. Italian, German, English, Czech, Croatian, Polish? Whatever, just slap a sticker on it somewhere.

Circular spam though is a fine Hungarian product. I have a feeling this packaging hasn’t changed since the communist era, and its loyal elderly customers like it that way.

They also love elderflower flavour things in Hungary. It’s common for restaurants to offer soda water with a dash of one of these fruit syrups. Much less sickly than a fizzy drink. I wanted to bring some back, but it wasn’t practical with my luggage.

Hungary is also big on fancy cakes. I wanted a slice of Dobostorte, but someone in front of me got the last slice.

Lots of outdoor taverna type places like this in Hungary, but closed at this time of year.

The Danube at sunset.